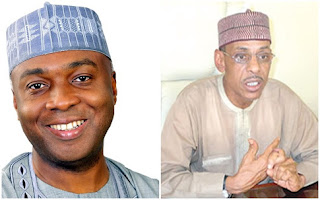 Mr Onemola in a series of tweets on his twitter handle:@OnemolaOlu absolved the President of the Senate of any links with the decision of his chief of staff.
The Chief of Staff dumped the APC in Kaduna on Monday. But in a swift reaction, the SA new media urged Nigerias not to be quick in linking the Chief of Staff’s Decision to his principal, Saraki.
He tweeted: “Before you people jump to conclusions, the announcement in Kaduna today by Dr. Hakeem Baba-Ahmed, Chief of Staff to the Senate President, has nothing to do with the SP, Dr. Abubakar Bukola Saraki.
“Before joining SP’s team, Dr. Baba-Ahmed has been a politician. He was the CPC chairman in Kaduna State and was the pioneer chairman of APC in the State.
“All politics is local and Dr. Baba-Ahmed has acted in line with the decision of his group in Kaduna State. So, please, there should be no basis for empty speculation.
The Chief to Saraki dumped the APC on Monday stressing that the party had performed below his expectations.
Saraki is a member of the aggrieved New People Democratic Party (nPDP), a faction of the PDP that broke out to join the APC in 2015. The nPDP are however now aggrived with the APC and are seeking redress from the party leadership.
While briefing newsmen in Kaduna on Monday, Hakeem Baba-Ahmed said: “This statement is to inform the public of my resignation from APC. I have sent a formal letter to this effect to chairman of my ward.
“This has been a very difficult decision, to leave a party I helped to form and made my humble contributions to put in power.
“After three years, however, I need to say that the APC has grossly under-performed and has forfeited any claim to my loyalty and continue membership.
“I do not believe in all concience, that it should be trusted and encouraged to continue to govern our great country beyond 2019.
“I am not leaving to join another party. This is my decision and mine alone . It has nothing to do with the president of the senate Dr Abubakar Bukola Saraki.
“It’s a decision taken after due consultations with Akida Group, a group that has predated my appointment as chief of staff to the President of the Senate.
“I will remain active in politics, as this is the main avenue for salvaging our nation from rising insecurity, poverty and bitter divisions,” he said.