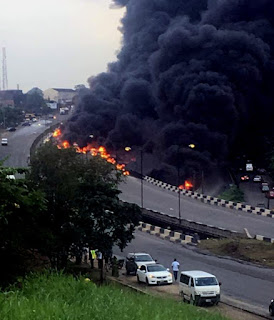 Several persons who witnessed Thursday’s tanker accident on Otedola Bridge along the Lagos-Ibadan expressway have narrated how it happened. Some of them disputed the official casualty figures released by government agencies in the aftermath of the tragedy.

A Mack truck tanker loaded with 33,000 litres of fuel went up in flames after it fell and spilled its
contents on the bridge.

Official figures stated that nine people died while four were injured in the inferno, which also consumed 54 vehicles.

But eye witnesses, who said they were at the scene before the accident said several more people died in the inferno.

A food vendor near the bridge told PREMIUM TIMES that the fire started a few minutes after the tanker’s contents spilled on the road.

She said some drivers frantically attempted to make a U-turn on the bridge while others parked their vehicles some distance away from the tanker.

“Before the fire started, people were still trying to get themselves and their vehicles away from the tanker as the oil continued to spill,” the lady who did not give her name said.

“I was trying to secure the safety of my kids when the fire finally started and it was too late for most people to leave their vehicles.

“There was a woman with four kids in her car. She opened the door and got out of the car but the children were consumed in the fire. There was also a school bus parked with pupils in the middle of the struggling vehicles and everything burnt down to ashes. It really was a gory sight to behold.”

A resident of Otedola Estate told PREMIUM TIMES that she heard people screaming and came out of her apartment.

“When I heard the shouts and came out of my flat, the fire had not started burning and when it started, it was like hellfire,” said the resident who also preferred anonymity.

“A vehicle that passed beside the fire when it started to burn also caught fire. A friend of my father had parked his car in front of the estate with the intention to quickly get something in the estate but got back to meet his car burnt beyond recognition.

“It is impossible to claim that only nine lives were lost in the fire I witnessed because before the fire started, most people were still thinking of ways to get themselves and their vehicles away from the tanker intact and escape became near impossible when the fire started.

“A woman that escaped from her car when the fire started, her legs was burnt badly and they had to rush her to the hospital even before the arrival of the emergency agencies.”

By Friday morning, officials had tried as much as possible to remove carcasses of burnt vehicles off the highway.

There were still evidence of the inferno the day before; a waste water that usually flowed under the bridge had dried up.

Rasaki Musibau, the Director of the Lagos State Fire Services, insisted that the figure of those who died was nine.

“We got the distress call from the Command unit around 5.25 pm and they responded immediately to the call with four fire trucks, three of which came from the Ikeja Station.

“We fought the fire for well over four hours, before we were able to successfully tame the fire and contain it totally,” he said.