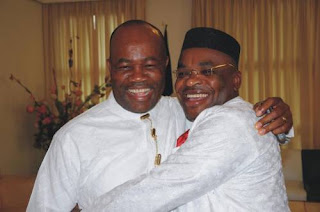 The Akwa-Ibom State chapter of the Peoples Democratic Party (PDP) says all is now set for a formal endorsement rally to honour
Udom Emmanuel, Governor of the state.

The announcement of the rally coincides with the final days of Godswill Akpabio, Emmanuel’s predecessor, in the party.
Akpabio, whose relationship with protégé Emmanuel has deteriorated, is poised to formally defect to the All progressives Congress (APC) on Wednesday.
Tagged ‘Eket Senatorial District Mega Endorsement Rally’, the event for Emmanuel is scheduled to hold on Monday, August 20, at the Onna Township Stadium.
According to the media and publicity sub-committee jointly headed by member of Mkpat Enin state constituency, Hon. Otobong Ndem, and Mr Ekerete Udoh, the Chief Press Secretary to the Governor, the occasion shall be chaired by Sir Etim Okpoyo, former Deputy Governor of the state.
The statement invites all to the event, described as a “grand Homecoming of an Illustrious Son of Eket senatorial district”.
“Among reasons cited for the celebration of the Governor by his senatorial district are his ingenuity, which has led to numerous industries, job opportunities, free education with WAEC fees, stability in power supply, improved healthcare delivery, affordable and sufficient food supply and security, and lots more,” read the statement.
The Ikot Ekpene and Uyo senatorial districts had recently rallied support in separate colourful endorsement ceremonies where Emmanuel was unanimously celebrated and endorsed for a second term.
Emmanuel became known in political circles in 2013, when he was appointed Secretary to the State Government (SSG) by Akpabio. With Akpabio’s support, he won the PDP ticket in 2014 and went on to win the governorship election a year later.
However, while he will remain in PDP, Akpabio’s defection to APC is scheduled to be officially confirmed on Wednesday.