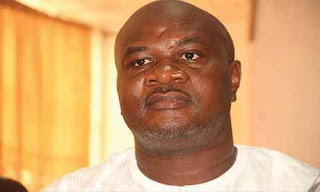 Eyebrows are being raised in Kogi East as Senator Atai Aidoko releases hoarded motocycles and other materials ahead of the 2019 elections.

The materials, including Keke Napep, sewing machines
and grinding machines were originally meant for the empowerment of people in the Kogi East senatorial district under the Millennium Development Goals (MDG) but were cornered by Sen. Aidoko, who is seeking reelection.

Atai Aidoko from Olamoboro local government of Kogi State was first elected senator in 2011 and was recently sacked by a court ruling, which argued he contested for the seat with a stolen mandate.

Members of the Senate are allowed to nominate projects in their constituents in alignment with MDG goals but funds meant for such projects are often diverted into buying give-aways like motocycles, sewing machines, grinding machines, which are then used as bait when elected representatives are due for re-election

Informed sources said the People’s Democratic Party (PDP) senator representing Kogi East had warehoused the materials running into billions of naira instead of giving them out to constituents, which is why the sudden release is raising more questions than answers.

One Source, who did not want to be named, said the senator kept the materials with the intention of using them as bait to entice delegates in the party’s convention, pointing out that this was done because he had nothing else to point to as major contribution to the welfare of the people of Kogi State.

He wandered why the senator was sharing those items now when in the last four years he had not done anything for his people, adding that Kogi East votes were now wiser and would do what they have to do at the PDP primaries in September to choose someone who will truly have their interest at heart.

Nearly four years after he controversially emerged the PDP’s flagbearer Atai Aidoko was removed  by judgement of the Abuja Division of the Federal High Court (FHC) led by a judge, Gabriel Kolawole.The court condemned the decision of the PDP to present Aidoko as its senatorial candidate in the 2015 general election, despite knowing that his challenger Isaac Alfa won the party’s primaries and was given a return ticket by electoral umpire, INEC.

Mr. Kolawole said the PDP used rogue elements to include Mr Aidoko’s name among the list of candidates for the March 2015 election and described the act as, “an exercise in futility.”