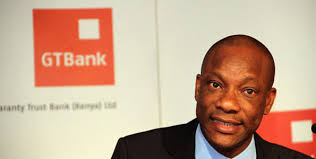 There is an internal fraud rocking Guaranty Trust Bank.
And it is affecting the very place that is a major pride of the financial institution headed by Segun Agbaje..It’s image.
The person charged with protecting the image of the bank of many just defrauded it ‘’mightily’’.
An inside staffer charged with
relating with the media and related publics was said to have diverted huge sums meant for ‘’perception management’’.

Gifts such as End of the Year and festive period packages were also diverted for personal use by the GT Bank staff and his collaborators.
He is also accused of creating crisis situations to ‘’get money’’ out of his employers at will.
And the rot when it was unearthed was said to have endlessly unsettled the management.
GTBank bosses in the know were reportedly staggered by the amount the chief suspect hoodwinked out of the bank after internal investigation was concluded.
Media partners were reportedly called for confirmation of certain payments at a point in the investigation.
The chief suspect was reportedly dragged to the Special Fraud Unit of the Nigeria police force by the Bank as part of efforts to recoup money traced to him.
The situation was said to be so bad that it placed all agencies charged with handling the image of the bank put under great suspicious.
The shadow of distrust is yet to be lifted.
The management of GTBank is said to be conducting an investigation into how complicit the agencies are in aiding its staffer to defraud the financial institution.
Investigation into why the Bank ended up not ‘’sacking’’ the chief suspect is still ongoing.


Ugo, a soulcom staffer in charge of the media of Guaranty Trust Bank in an ill-mannered response refused to comment stating ''I am not the only person handling GtBank Business''
Posted by MAN ABOUT TOWN at 10:03 AM