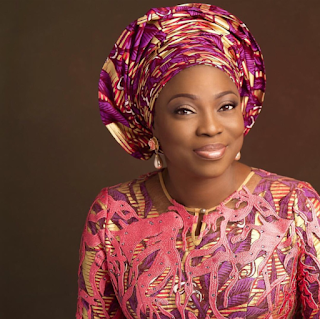 A last-minute effort by the wife of the Lagos State Governor, Bolanle Ambode, to save her husband’s job was said to have hit a brick wall on Tuesday.
It was gathered that Bolanle,
who followed Governor Akinwunmi Ambode to Osun State on Monday for the Tuesday’s All Progressives Congress’ mega rally for the state governorship candidate, Gboyega Oyetola, waylaid the National Leader of the APC, Asiwaju Bola Tinubu, and tried to pacify him to change his mind.

Sources told our correspondents that her efforts did not yield any result as Tinubu was said to have “received her cordially and joked with her.”
“At a point, she became emotional despite the fact that many party leaders were there. But Asiwaju (Tinubu) did not give her the answer she desired. He merely treated her with courtesy,” one of the sources said.
The governor and Tinubu have been in the news in the past few days over the second term bid of Ambode.
Tinubu had refused to back Ambode’s second term ambition despite pleas by notable people in the state and the country.
Instead, the Tinubu-led Mandate Movement in the Lagos APC had backed Babajide Sanwo-Olu, who obtained his form last Tuesday.
The chairmen of the 57 councils had also declared support for Sanwo-Olu.
Sawo-Olu, a former commissioner in the state on Sunday formally declared his intention to vie for the Lagos State governorship ticket of the APC, promising to restore the glory of the state.
Notable APC leaders in the state, who were either allies of Tinubu or his followers, were at the declaration.
Meanwhile, sources said the Mandate group had started wooing another aspirant on the APC platform, Dr Obafemi Hamzat.
It was gathered that Tinubu’s men wanted Hamzat, who is from the Lagos East like Ambode, to become the deputy governor with a promise that he would supervise a ministry and also nominate two commissioners into the cabinet.
Hamzat campaign team could not be reached on Tuesday for comment.
PSP operators declare support for Sanwo-Olu
In a related development, the Association of Waste Managers of Nigeria on Tuesday made public its intention to support Sanwo-Olu.
The Lagos APC will hold its primary next week to decide who will be its governorship candidate in 2019 election among the incumbent Ambode, Sanwo-Olu, and Hamzat.
At a press conference in their Mushin office on Tuesday, the PSP operators said they believed that Sanwo-Olu, if voted in to replace Ambode, would restore their jobs which the incumbent administration took and gave to a foreign company, Visionscape.
The Vice Chairman of the association, Mr David Oriyomi, who addressed journalists alongside other executive members of AWAM, said the decision to back Sanwo-Olu, was in the interest of about 25,000 workers engaged by the 350 PSP operators, who had lost their jobs.
Oriyomi said the association boasts of no fewer than 150,000 voters at the grassroots, who would be mobilised to help Sanwo-Olu to achieve his governorship ambition.
He expressed the confidence that not only would the emergence of Sanwo-Olu as the next governor of Lagos State help to revive the business of the PSP operators, it would also restore Lagos to its former clean state.
He said, “This injustice should not be allowed to continue, the health and well-being of residents of Lagos must be paramount to all.
“It is, therefore, with great hope that we welcome the emergence of Sanwo-Olu, who has promised to run a participatory government.
“For this reason, we, the Association of Waste Managers of Nigeria, have decided to align ourselves with Mr Babajide Sanwo-Olu and pledge our full support to him in the forthcoming elections.
“This decision was taken in the best interest of the environment. We remain committed to servicing the great residents of the centre of excellence. It is time to clean up our city; we did it before, we are able and willing to actualise the Lagos of our dreams.
“We did not just choose to support Sanwo-Olu; we looked at the aspirants. We have the incumbent, we have Femi Hamzat and we have Sanwo-Olu.
“The incumbent, we have seen what he has to offer when it comes to waste management in the state – there is nothing he can offer us.


“Then Hamzat, we have not heard much from his camp; but Sanwo-Olu named the issue of the environment as one of the critical issues that he is going to tackle,” Oriyomi said.
Posted by MAN ABOUT TOWN at 4:05 AM