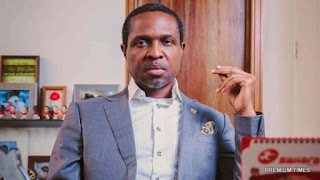 Tonye Cole currently blows hot because he believes he was betrayed for cool cash. He has been telling whoever cares to listen about his huge investment with Jite Okoloko
Beneath his happy-go-lucky visage, oil mogul and accidental politician, Tonye Cole, is currently carries a numbing
heartache. The former executive director of Sahara Energy, was approached by one of his friends, Jite Okoloko, Chairman of Eroton Exploration & Production Limited, to invest in a multi-million dollars oil deal years ago. Both are good friends and regularly hang out and support each other’s initiatives and ventures.

‘’Tonye trustingly invited  his partners to partake in what looks like a sure deal and they pulled together the capital believing that a windfall awaited them. They allegedly invested over 200 million dollars in Eroton. Then, the waiting game began. Though he might not exactly have been playing games, Tonye, sources said, reckoned however that his prevarication and the multiple excuses he keeps spewing whenever the ‘investors’ were lucky to corner him had become rather unbecoming of a dear friend with a thriving oil and gas concern.
However, once one has got the money habit, it is extremely difficult to kick it; some are overwhelmed by the habit and some simply manage to tame the habit. The latter breed is constituted by such moneyed men like Jite. Very few people know that he has a weakness for the good life. In fact, one would have to get very close to him to know that he never dithers from acquiring the finest luxury money can buy. As you read,  Jite, a smart dude, owns luxury properties in very expensive and exclusive neighbourhoods across New York and some states in the USA.
‘’Eroton Exploration & Production Limited’s core values are transparency, accountability, integrity and excellence, values that the proprietor might have fallen short of, if this deal were to be the common denominator.
Tonye  who aspiring to be the next governor of Rivers State, is reportedly not spoiling for a fight yet but the way things are going, when push comes to shove, Jite might have some explanations to do in an environment structured for such.