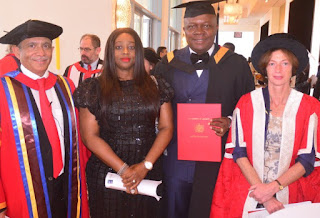 The Managing Director/Chief Executive, Transcorp Hotels Plc, Mr. Valentine Ozigbo, was on Friday conferred the award of a Distinguished Alumni of the Lancaster University. The award was conferred on him at a special convocation ceremony of the university held at its Ghana Campus.
The University’s Vice Chancellor, Prof. Mark Smith, who
spoke during the event, praised Ozigbo for his laudable achievements recorded over the years since he graduated from the university.

He said, “Your extraordinary achievements in both the banking and luxury hospitality industries are impressive, as is your passion for promoting youth empowerment through initiatives such as youth leadership forums.
“This award is therefore to appreciate these achievements as we believe that your contribution to your field will be an inspiration to current Lancaster University students and their parents,” he noted.
Ozigbo who expressed delight over the honour accorded to him by his alma mater, commended the ideals of the school, which according to him contributed immensely towards molding him to the heights he had achieved till date.
He said, “My studies at Lancaster University laid a solid foundation in my life for the progress I achieved, because soon after my graduation, I started off with then Standard Trust Bank (which became United Bank for Africa), and was charged with the responsibilities that had global outlook in nature, including managing investment banking clients, embassies and multilaterals and later on global expansion.
“So, the fact that this was a top international University and the specialized discipline I majored in, among others, contributed to the decision to work in these international areas. I excelled in each of these areas because Lancaster University exposed and prepared me well. Therefore, I give credit to Lancaster University for my modest achievements,” he said.
Ozigbo, a Chevening Scholar, graduated in 2004 from the Lancaster University Management School England with an outstanding Masters Degree in Finance, with Distinction. He also holds a Bachelor of Science (BSc) degree in Accounting (1994), emerging the best Student in the faculty, and Master of Business Administration (MBA) in Banking and Finance (2000), both from the University of Nigeria, Nsukka.
He is a fellow of many professional bodies, notably Institute of Chartered Accountants of Nigeria.
Since leaving Lancaster University in 2004, Mr. Ozigbo has achieved a lot in both professional, personal and community life. He spent a total of 17 years in the banking industry rising to the level of General Manager before transitioning to the hospitality industry where he led the positive transformation of Transcorp Hotels Plc for over 7 years, winning many awards locally, regionally and globally, including Seven Stars Luxury Hospitality CEO of the Year Award (presented at a global event in Spain).
Ozigbo is also known for his youth empowerment works. Apart from leading the effort, with another friend of his in donating books from Lancaster University to the University of Nigeria, where they first graduated from, he has been involved in a number of mentorship, youth empowerment and community development initiatives.
Posted by MAN ABOUT TOWN at 11:56 AM