All The Winners , Losers In APC Guber Primary That Denied Ambode Re Election! 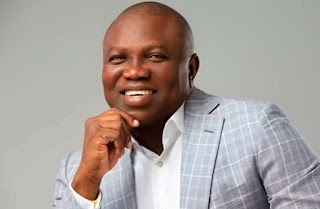 On Wednesday, the Lagos State Governor, Akinwunmi Ambode, accepted defeat in the governorship primaries of the All Progressives Congress (APC) in the state.

Speaking in Lagos, Mr
Ambode congratulated Babajide Sanwo-Olu, the winner of the party’s governorship ticket and the favourite candidate of power brokers in the state chapter of the party.

The declaration put paid to speculations among analysts that the governor may defect from the APC in pursuit of his gubernatorial ambition.

“The interest of our beloved state must always supersede that of any person or group,” Mr Ambode said in the broadcast. “It is in this regard, that I wholeheartedly congratulate the winner of Lagos State APC primaries, Babajide Sanwo-Olu, and urge all Lagosians to immediately support our party’s gubernatorial candidate in the 2019 elections and work for the success of our dear party.”
Mr Ambode’s concession speech Wednesday brought to an end several weeks of politicking among supporters and traducers of the two major aspirants. Mr Sanwo-Olu is now positioned to represent the party in next year’s governorship elections.
As the party awaits the candidates of opposition parties – especially the Peoples Democratic Party (PDP) – ahead of the gubernatorial election, PREMIUM TIMES highlights the winners and losers in the Lagos APC governorship ticket debacle:

Easily the biggest winner in the many weeks of politicking and ‘uprising’ in the Lagos APC, Mr Sanwo-Olu, a little known cabinet member in previous governments in Lagos, emerged the party’s governorship candidate on Tuesday. A few months ago, very little was known about the former commissioner for establishments, training and pensions. Although not a green horn in politics, Mr Sanwo-Olu’s emergence was largely influenced by his endorsement by APC national leader, Bola Tinubu, and the Mandate Group. Lagosians are eager to know the stuff he is made of, especially in a state that has over the years fielded vibrant individuals as governors.

Undoubtedly the most influential politician in the South West today. Mr Tinubu wields enormous power in Lagos, South-west and, indeed, Nigeria’s politics. Although he has largely shown his preference for Mr Sanwo-Olu by proxy, his last-minute public endorsement of the candidate went a long way in shattering Mr Ambode’s ambition. Since he vacated office after serving as governor between 1999 and 2007, Mr Tinubu has had enormous influence in decisions surrounding who becomes Lagos governor.

The Mandate group, led by James Odumbaku (popularly known as ‘Baba Eto’) played key roles in the fall of Mr Ambode. Members of the group, an influential bloc in the party, have long shown disdain to the governor. They mobilised party members and saw to the victory of their favourite candidate, Mr Sanwo-Olu.
Similarly, the Lagos APC had in defiance to the NWC panel declared Mr Sanwo-Olu winner of the primaries even amidst confusion on Tuesday. Tunde Balogun, the state APC chair, pronounced Mr Sanwo-Olu winner with 970,851 votes against Mr Ambode’s 70,901 votes.

Few days before the governorship primaries, 36 of the 40 members in the Lagos State House of Assembly endorsed Mr Sanwo-Olu. The members claimed they took the decision in conformity with the party directive. Many of the members will now be hoping the party rewards them by helping them return to the state assembly.

Some days before the primaries, the Association of Waste Managers in Lagos endorsed Mr Sanwo-Olu. The endorsement was quite expected as the PSP operators had in the last two years been at loggerheads with Mr Ambode after the governor contracted a foreign company, Visionscape, to manage waste in the state. In their endorsement message, the PSP operators said Mr Sanwo-Olu promised to run a participatory government and would return their jobs to them.

Similarly, as the political pendulum in the state swung ahead of the primaries, local government chairpersons in the state endorsed Mr Sanwo-Olu. The endorsement, analysts said, was largely borne out of political survival.

Incumbent governor Akinwunmi Ambode’s fall came as a rude shock to many Lagosians, especially those who are not privy to details of goings-on in the state chapter of the APC. Although the governor, like his predecessors, enjoyed rave review in the media, he eventually lost out in the power play as many officials (including senators, House of Representatives members, state assembly members etc) who endorsed him for second term months ago dramatically retreated and abandoned him.
Mr Ambode, who had criticised the primaries held on Tuesday across the state, finally accepted the result Wednesday, while also pledging loyalty to the party. He becomes the first incumbent governor to lose re-election ticket of his party in the current dispensation ahead of the 2019 general elections.

Another remote loser in the Lagos APC debacle is the foreign firm contracted by Mr Ambode for the cleaning of Lagos waste, Visionscape. Although the government claimed the company had good track records of waste management, checks have shown that the company had no such record. This became evident when the company could not deliver on its tasks in its first months, leaving the state with heaps of refuse. Visionscape’s presence and the cancellation of PSP waste management arrangement created a number of foes for the governor, largely among party faithfuls and other PSP operators. It is unclear what would become of the company’s operations in Lagos as the new power brokers are set to take over the leadership of the state in 2019.

Fouad Oki, a factional leader of the APC, backed Mr Ambode in the primaries. He had earlier led other party faithfuls to create a breakaway faction in the party during its congress months ago. During the primaries, Mr Oki threatened to conduct a parallel exercise because political thugs prevented potential voters of the governor from voting.

Although a few officials of the government aligned with the party on Tuesday, many of Governor Akinwunmi Ambode’s officials and media handlers supported him till the end. On Wednesday, hours before the governor conceded defeat, a member of his campaign organisation had dismissed the Tuesday primaries as void.

Meanwhile, there are other parties caught in the middle of the conflict whose fate one cannot categorically place now. They include:

On Tuesday, in the heat of the elections drama, Mr Ambode’s deputy, Idiat Adebule, abandoned the governor to support Babajide Sanwo-Olu in the two-horse race to pick the party ticket.

Mrs Adebule told journalists at Ward A and D in Iba Local Council Development Area of Lagos where she participated in the governorship primary of the APC, that she would endorse the candidate chosen by the party.

“The party has chosen a man and it is that man that I will support and follow,” she said. It is unclear what this spells for her political future.

Even when everyone seemed to have deserted the governor by noon on Tuesday, videos were still shared by party faithfuls who stood behind the governor across the state, especially in Epe, his hometown. Given Mr Sanwo-Olu pledge to form an ‘inclusive’ government, it is unclear what he would do with Mr Ambode’s foot soldiers in the party ahead of the general election next year and, possibly, afterwards.

While many non-partisan Lagosians followed and enjoyed the intrigues while it lasted, how the results would shape their lives cannot be determined yet. The intrigues and keen attention it generated could be linked to, one, the influence of APC in the state and, two, the status of Lagos as the commercial nerve centre of the nation. Even if their interest in intra-party affairs remains largely remote, the decision of the party has far-reaching effects on policies in the state and on residents.
In the meantime, it appears, while Lagosians look forward to the gubernatorial choices of other opposition parties in the state, the people await what the (post-2019) future holds for them with bated breath.

premiumtimesng.com
Posted by MAN ABOUT TOWN at 6:01 AM