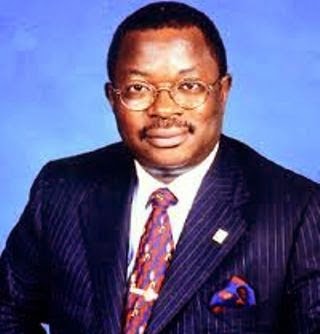 Here is
a reproduction of growing popular report on the development

'After what seems like a relief from his chains of legal battles home and abroad over his fraudulent practices in his capacity as the Managing Director of the defunct Intercontinental Bank, Dr. Erastus Akingbola
who was found guilty of stealing and diversion of billion of depositors funds to buy properties in the United Kingdom and purchase of shares for himself to manipulate its share price in the stock market, is struggling to make a return.

‪Perhaps unaware that there is nothing left of his reputation after the land judgement delivered by Mr. Justice Burton of the Royal Courts of Justice, Strand, London in a suit instituted by Intercontinental Bank soon after the Economic and Financial Crimes Commission charged him for fraud in 2010, Akingbola who was ordered to refund the about N165bn stolen from the Bank through various fraudulent means, is still struggling to find relevance in the society.

‪Akingbola who is trying to exploit current situation to bury some of his unwholesome practices while in office such as granting and guaranteeing loans to his companies to the tune of N16bn in respect of Tropic Finance and unlawful share purchase scheme of N145bn and about £10.5million in respect of Furgler Payment claim, has begun to run from pillar to post, seeking sympathy from the President of the country and many government financial regulatory bodies, but it seems nobody is ready to look his way because of the weight of evidences against him.

‪Unfortunately for the former Banker, the story of how he looted Intercontinental Bank is still fresh in the memory of Nigerians. According to available facts presented by Jimoh Ibraheem, the Bank’s Chief Inspector who was prosecution witness in the high profile case of fraud and stealing against Dr. Erastus Akingbola. He detailed how funds were transfered to the offshore account of Dr. Akingbola.

‪'Led in evidence by defence counsel, Godwin Obla, Abdulraheem told the court that he was once invited by the EFCC to give statement about the movement of funds from Intercontinental Bank to various companies account on the instruction of Akingbola while he held sway as Managing Director of Intercontinental Bank.
‪He went on to identify a copy of the statement he wrote on  28 January, 2011. Obla consequently urged the court to admit the document as exhibit but defence counsel, Felix Fagbohungbe, SAN objected, arguing that he needed time to study the document. The objection was over ruled by the court and the document was admitted as exhibit.
Another document authorizing the transfer of £1.3 million was also tendered by Obla. After certifying that he recognized the document, the witness informed the court how he was ordered via an instruction memo to transfer the sum of 1.3 million pounds to the account of a British Law Firm,  Fulgers Solicitors. “I was authorized by Dr Akingbola to inform the Head of Funds Department, prior to the instructions; there were discussions that the said amount be transferred to the account of Tropic Finance Limited. The instruction came via a memo and the order was swiftly carried out. Mr. Akin Fabunmi who is the Head of Funds Department carried out the instruction, “he stated.
‪A copy of an unsigned memo conveying Akingbola’s instruction to effect the transfer was given to the witness to confirm if that was the memo containing the instruction. The witness confirmed the document which was subsequently admitted as exhibit. As to the where about of the originals, Jimoh said all original documents relating to the trial were lost in the cause of investigation.
‪He continued that the instructions were carried out and the funds were transferred to the account of a British Law Firm, called Fulgers Solicitors. Obla asked the witness if there was any evidence to back up what he said. The witness said an electronically generated swift message is attached to the unsigned memo which represents the confirmation of payment. He was asked if he would recognize the said message. He answered  in the affirmative and the court handed him a copy of both the message which he confirmed.  He said such messages are usually printed out of the computer if foreign account transfers are carried out.
‪'Counsel to Akingbola said the documents tendered are not original and urged the court not to admit them as exhibits.Obla responded saying the originals have been misplaced as stated by the witness in the process of investigation. He referred the court to section 97(1) C of the Evidence Act which said copies of documents can be admitted. The objection was overruled by the court and the documents were admitted as exhibit
‪Another document tendered by Obla was a letter written to the Bank (Intercontinental Bank Plc)  by one Corporate Securities Nigeria Limited requesting that  the Bank should make a payment of 10 billion naira for some shares purchased for the bank. The letter listed how the payment was to be made to some companies. These companies are: Tropics Securities, Bankinson Nig. Ltd, and Tropics Properties.
‪The letter was signed by Bayo Dada, who is a co- accused. The witness said that instruction was also carried out as the funds were taken from pre- payment account of the Bank and credited to those companies. He said while investigations commenced, the Bank management asked him to conduct investigations as to the movement of cheques issued to those companies and it was discovered that the three cheques have been deposited in those companies’ accounts at Access Bank.
'‪Further investigations revealed that the companies were linked to Akingbola and his wife, Antonia. Jimoh said the instruction to effect payment was given by Akigbola through verbal instruction. A certain Mr Fabunmi then raised a memo to effect it.
‪Another 8.6 billion naira was also taken from the bank through the same General Ledger manipulation. Dr. Akingbola  had written a letter instructing that the said sum should be credited to the accounts of Tropics Properties Ltd., Bankinson Nig. Ltd and Tropics Finance Ltd around May and June, 2009.Through the same manipulation the sum of 3.35 billion naira was also moved via an instruction given by Tropics Finance Ltd. to Bankinson Nigeria Ltd., a company where his wife, Mrs. Antonia Akingbola has interest.
‪Also on the 15 May, 2009, the sum of N350 million was paid into the account of Intercontinental Homes, N500 million was paid to the account of Intercontinental Securities and another N250 million  was paid into the account of Intercontinental Capital Market, all subsidiaries of the Bank. The said payment was effected based on a letter dated 18 May 2009, received from Bayo Dada of Tropics Finance. The witness said this particular transaction was manipulated as the date of transfer on the statement varied from the day the instruction was received.
'‪The sum of N1.550 billion was also moved fraudulently on the 22 May, 2009 in the same manner. An instruction from Akigbola was passed to the bank for the said money to be moved into the accounts of Tropics Finance Limited and Associated Discount House. The sum of 1.5 billion was moved to Tropics account to be fixed for one month while 50 million naira was paid to Associated Discount House to pay off debt owned by Tropics Finance Ltd.  By this, Dr. Akingbola and his associate Bayo Dada are standing trial on a 22 count charge bordering on stealing of over N42.4 billion from the defunct Intercontinental Bank Plc.
‪Yet to be absolved of these heinous crimes, the banker is desperately using different methods to frustrate his trial and escape spending years in jail. But a top government official disclosed to us that Akingbola, no matter how long, will be punished under the law for his economic atrocities in the country and that president Jonathan has said the law must take its course despite the pressure being mounted on the presidency by the disgraced banker to get Intercontinental bank back' 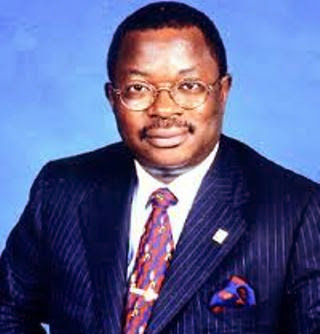