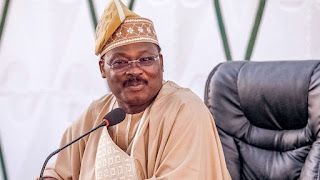 An aggrieved member of the All Progressive Congress, Deji Aboderin has defected to the Peoples Democratic Party (PDP)

Aboderin who was the
Senior Special Assistant on Public Affairs to former Governor Abiola Ajimobi, cited his dissatisfaction with how he was sidelined by APC party leaders during the last general election as the reason for his defection.
He had contested on the platform of the All Progressive Congress (APC) for the Ibadan Southeast/Northeast Federal House of Representatives in Oyo State during the 2019 general election,

Addressing a press conference on the development on Sunday, Aboderin said he waited this long to assess the performance of the Governor Seyi Makinde- led PDP administration before taking the plunge.

He said: “I believe in humanity, I believe in people, I believe people should be empowered, I believe in free education that the governor has done and still doing I believe strongly in education which he is pumping money into at the moment and from that,after all the consultations with my constituency, I thereby defect to the PDP from today.”

Justifying his decision to defect at a time the APC was beginning the reconcilliation process, he said: “I will say this to you,I’ll go back to when I ran for an election under the APC as the the Federal House of Representatives candidate, I had issues because of this same problem going on within the APC.
“When I won the ticket to represent my constituency Ibadan Northeast/Southeast local government, I had issues with the Secretary of the party and the state chairman who never wanted me to be the candidate of the party and they vowed that they will make sure that I didn’t win the election because they have the son of their godfather,who put them in the position that they had agreement with to support.


“Then on the election day, I could see what they did to my vote by working against me, whereas all of us as party members including the party Chairman and secretary were supposed to work together for all the candidates but they worked against me and I have evidences to prove that.

“Aside from that, during the election, I was leading up till the midnight and I got a call from someone that they were beginning to void my votes and taking out from my votes for no reason.

“Then I called my lawyer and after the election we saw that there were some foul plays in the calculations and we were planning to do further investigation when we got a call from the party leadership for a meeting of those of us who lost and they said we should not go to court that the party would go to court.

“In order words, they are supposed to include all of us in the suit and I had to step down my lawyers for the party decision.

“Not until a day to the deadline for the submission of petitions that I called the party leadership that I hadn’t been consulted and they said they were on it. Only for me to find out later that the party secretary removed my name from those going to court, while it was already too late for me to make any case.

“It was just only my name that was removed for no reason. I called my lawyers to see what we could do on my own but it was already too late because the deadline for the submission of the names had lapsed.

All my efforts to reach the party leaders proved abortive as they all kept ignoring my calls and eventually when I saw the Secretary, he couldn’t give me any tangible reason.

“So, for me it shows that there was a conspiracy from day one for me to lose that election and if I am going to win it through the court, they already perfected their plans.

“I would have gone before the APC reconciliation committee if only the present governor is not doing well. I am still a youth and we have gotten a youth in power. We have gotten someone who is doing well,what’s the point of going against a governor that is doing well because of my selfish interest?”

7“What matters now to me is to support any individual or any governor that iss doing what should be done and loved by his people and also doing well in terms of governance of his people.”