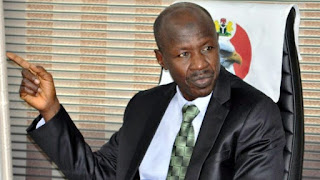 The house of representatives committee on public petitions has issued an arrest warrant on Ibrahim Magu, acting chairman of the Economic and Financial Crimes Commission (EFCC).

The lawmakers
took this action after Magu failed to appear before them on different occasions.

The committee is hearing a petition filed by Patience Jonathan, former first lady.
In the petition, she accused the EFCC, the National Drug Law Enforcement Agency (NDLEA), and other security agencies of harassing her.
At a resumed hearing on Wednesday, Uzoma Nkem-Abonta, chairman of the committee, said Magu was nonchalant about the issue.
Nkem-Abonta said the acting EFCC chairman failed to appear before the committee after several letters was sent to him.
“There is a need to say that people should work within the confines of the law because nobody is above the law,” he said.
“EFCC has consistently absented itself from this hearing. If it were here, perhaps we would have dispensed with this investigation.What the EFCC is doing is not only unfair but disrespectful to the parliament.”
Kingsley Chinda, a lawmaker from Rivers and member of the committee, moved the motion for an arrest warrant to be issued for Magu.
“It’s not only for the workings of this committee but for any other institutional body,” Chinda said.
“So, I move that the EFCC chairman be issued a bench warrant to appear before this committee to explain his role so that we can conclude this investigation.”
All the members of the committee present supported the motion and Nkem-Abonta ruled that a bench warrant be issued for Magu.