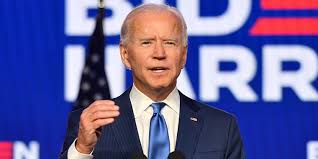 He lost in both the critical Iowa Caucus and New Hampshire Primary in February, before his first victory in South Carolina later that month, and then surged to victory in at least eight of the 14 states where Democrats held primaries on so-called 'Super Tuesday' in March, outperforming expectations.

After gaining a large delegate lead from key Super Tuesday victories, Biden emerged as the clear frontrunner in a crowded field of strong Democratic rivals, including U.S. Senators Bernie Sanders, Kamala Harris, Elizabeth Warren, plus South Bend, Indiana Mayor Pete Buttigieg -- all of whom would go on to give Biden their full-throated endorsements.

In August, shortly before the Democratic convention, Biden picked former rival Harris as his choice for vice president, making her the first Black woman on a major-party U.S. presidential ticket and giving him a partner well prepared to go on the attack against Republican President Donald Trump.

The convention, typically made-for-television affairs featuring often-raucous speeches in front of thousands of the party faithful, was almost entirely a virtual event. Biden formally accepted his party's nomination and delivered a national address from his home state of Delaware.

Since clinching the Democratic presidential nomination, Biden has increasing sharpened his attacks on Trump, chastising him on the economy, foreign policy, race relations and most recently his handling of the coronavirus pandemic that has put millions of Americans out of work and forced the 2020 White House race into a digital-only environment.

Trump and Biden battled fiercely over Trump's record on the coronavirus pandemic, healthcare and the economy in a chaotic and bad-tempered first debate in late September marked by personal insults and Trump's repeated interruptions.

For Trump, 74, the debate represented one of the few remaining chances at the time to change the trajectory of a race that most opinion polls showed him losing, as the majority of Americans disapprove of his handling of both the pandemic and protests over racial injustice.

Biden, 77, has held a consistent lead over Trump in national opinion polls, although surveys in the battleground states that will decide the election show a much closer contest.

Trump plans to resume in-person campaigning this week after being sidelined by a case of COVID-19, but a debate set for October 15 against opponent Biden was canceled because Trump refused to participate. A final debate on Oct. 22 is still set to take place.

With Trump's management of the pandemic dominating the campaign, a new Reuters/Ipsos poll showed Americans steadily losing confidence in how he has managed the health crisis - with his net approval on the issue hitting a new low.

If elected, Biden, who is 77, would be the oldest U.S. president in history.