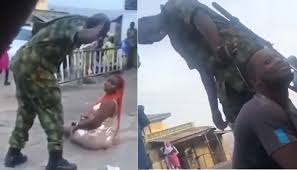 Soldiers deployed in the streets of Beere in Ibadan, Oyo State, to curb the #EndSARS protests have been caught on camera flogging a woman for what they termed ‘indecent dressing’.

Some of the soldiers, who were chanting ‘End SARS’, also shaved the heads of some youths said to be wearing improper hairstyles.

In a video that has since gone viral, a young lady wearing a spaghetti-strapped dress and orange-coloured hairstyle is made to sit on the bare floor at a filling station while a soldier whips her buttocks.

The lady begs the soldier repeatedly but the adamant soldier asks her not to protect her buttocks as he continues to whip her.

A young man, whose head was also shaved, narrates how he was pulled down from a commercial motorcycle by one of the soldiers.