The trial of former Head of Service of the Federation (HoS), Winifred Oyo-Ita continued on Tuesday, December 1, 2020, with the trial judge, Justice Taiwo Taiwo of Federal High Court Abuja, adjourning ruling till December 3, 2020 on the propriety or otherwise of the order freezing, the accounts belonging to the fourth, fifth and sixth defendants, secured by the Economic and Financial Crimes Commission, (EFCC) in a different court.

The freeze order obtained by the Commission from Justice Mojisola Giwa-Ogubanjo of a Federal High Court, Abuja became contentious issue following objections to it by the defence team, which felt it constituted abuse of court process.

A.C Ananukwa and Chitoo Veronica Nbanor, who are counsel to the fourth, fifth and sixth defendants further told the court that their clients could not make an appearance in court today because their accounts had been frozen, leaving them and their families high and dry.

They therefore requested the court to mandate the EFCC to unfreeze the accounts.

Though Justice Taiwo was piqued by the freeze order from another court, which he felt undermined his court, the prosecution took time to explain the wisdom in its action.

“At this point, it is worthy to explain that the criminal matter between your lordships is a one of a whole. The first defendant in this matter has been availed with some of the counts in charge number 60 and 61 before Justice Ogunbanjo and, I.E Ekwo charge number FAC/ABJ/CR/61/2020 between FG and Kabir Turaki SAN and five others.

“The bank accounts of the respondents in the application to Ogunbanjo contain some bank accounts before you and the other charge that I mentioned earlier (Kabir Turaki) as the two case emanated from Ekwo and yours emanated from the same case file, but because of the multiplicity of the members of the case, the prosecution decided to split the two charges for ease of prosecution.

“In light of this, it is my humble submission, that we did not engage in abuse of court processes. We also did not file this application as lack of confidence in the court. We only did it in exercise of our statutory duty and with utmost transparency.

“However we sincerely apologize in the event that our action displeased this honourable court. We have confidence in your lordship’s ability to do justice in this matter and all other matters,” Abubakar stated. 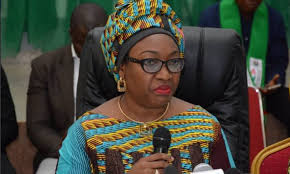 Though Abubakar opposed the defence’s application for adjournment, saying that it ran against Section 3 and 6 of the Administration of Criminal Justice Act and contrary to Section 19, 2c of EFCC Act 2004 and Section 20 (3) of the Money Laundering Act of 2011 as amended, upon which this case was filed, the judge adjourned further proceedings in the case, saying he needed time to study the arguments of the prosecution on the frozen accounts to make his ruling.

Oyo-Ita is facing prosecution on18-count charge of official corruption and money laundering to the tune of N570 million, involving, obtaining of estacodes and duty travel allowance, (DTA) for journeys either not undertaken or non-existent.

Others are: Ubong Okon Effiok and his companies, U & U Global Services Limited and Prince Mega Logistics Limited.