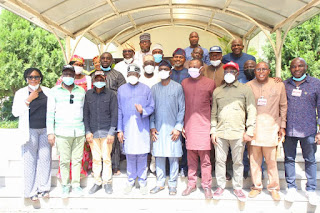 The candidates of the All Progressives Congress won their elections by wide margins.

Observers attribute their victories to the solid political foundation put in place by Tinubu on which the APC is built in Lagos state and the southwest in general.

“The victories of Abiru and Saheed shows how solid the APC is in Lagos state and its environs, especially because Tinubu who is the rallying point of the party was out of the state when the elections held” is the talk of the town since the election held.

The checks by societynow.ng revealed that the heavyweight politician was in Osun on Thursday to put the APC on better footing from where he proceeded to attend the burial ceremony of Awo’s daughter (Mrs Oyediran) at Ibadan, Oyo State on Friday. From the ancient Oluyole city, Asiwaju took off to Kano for another event.

Added revelation has it that Tinubu left Kano for Abuja on Saturday for another engagement.”

He was, however, back in the state to receive the senator-elect Abiru and state legislator – elect Saheed and their entourage on a visit to show “heartfelt appreciation for building and providing the political platform that made them winners this morning -Sunday, December 6, 2020 – at his Lagos residence societynow.ng learned.

“From this, it is clear that the Lagos APC machine is so super efficient and primed to deliver even without Asiwaju being physically on ground’ is part of the talks bandied about the town since winners of the bye-elections were made known.

‘Obviously, the opposition parties and their leaders remain paper tigers with little or no electoral value” is another comment gaining ground after the bye-election and pictures of the thank-you visit to Tinubu circulate on and offline.