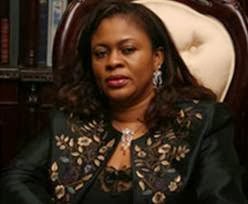 Agents of Embattled Minister of Aviation, Stella Oduah have started a passionate move to change public perception about her...and ultimately bail her out of the increasing embarrassment and controversies of the purchase of two luxury cars for N255m for personal use dangling on her neck.


Here is how online news spotter, societynowng.com reports the development

' Handlers of Stella Oduah, the embattled Minister for Aviation have initiated a major move.

They want to change public perception about their boss. And have kick started a nationwide campaign.

And the focus of the effort is simple: highlight the 'achievements' of the minister - swimming in the murky waters of corruption-since she assumed office.

According to a source 'other sensitisation networks are earmarked for more aggressive campaign to play up the performing minister agenda'.

Insiders revealed the move is aimed at creating more fertile ground for the defence of 'acquisition as a result of need', in the N255m car purchase scandal rocking the Minister. And ultimately protect Oduah's job.

The public outrage trailing this revelation is the fulcrum of movement for the calls for sack and prosecution of the embattled Minister.


In a related development, recognised legal mind Femi Falani has provided 13 grounds for the prosecution of the Minister and her agents - for gross misconduct -in the car purchase mess by anti graft agency, Economic and Financial Crimes Commission (E.F.C.C).

Mr Falana reportedly initiated the development in a letter Saturday November 2 2013 and addressed to the E.F.C.C chairman, Mr Ibrahim Lamorde.

'The grounds listed in the letter equally requesting for investigation report on the matter, with a deadline of Friday, November 8 are :

...facts and circumstances of the “illegal transaction” had established, among others, that “there was no appropriation for the sum of N255m for the acquisition of armoured cars in the Appropriation Act, 2013.”

...the minister “exceeded her approval limit as only the Federal Executive Council can approve any transaction of N100m and above; and the transaction did not comply with any of the provisions of the Public Procurement Act.”

...“The prices of the two cars were inflated by the auto company in connivance with the aviation minister and the management of the NCAA.

...“The loan of N643 million sourced from the First Bank Plc for the purchase of operational vehicles for the NCAA was not approved by the National Assembly.

...“The repayment of the loan in 36 months by the NCAA is tantamount to contract splitting in contravention of the Financial Guidelines of the Federal Government.

...“That the Aviation Minister admitted her involvement in the extra budgetary purchase of the cars when she gave illegal approval before directing the NCAA officials to “do the needful”!

...“The Media Assistant to the Aviation Minister who claimed that the armoured cars were purchased for the “safety” of his boss has not denied the official statement.

...The Ministry of Aviation conspired with the auto company to evade the payment of appropriate duties on the armoured cars to the coffers of the Federal Governmen as they obtained duty waiver by false pretences from the Federal Ministry of Finance.

...“The First Bank Plc  entered into an illegal loan agreement with the NCAA to finance the illegal transaction from the internally generated revenue of the NCAA. Under the law loans can only be approved by the legislative arm of government fo fund capital projects and not for the purchase of cars.

The reputable lawyer who accused the House of Representative probe panel on the car acquisition scandal of not asking pertinent questions when the Minister appeared by for it, urged the E.F.C.C to prosecute the minister  “for gross economic and financial crimes as they wilfully violated the relevant provisions of the Constitution, the Public Procurement Act as well as the relevant Circulars and Financial Guidelines of the Federal Government.”

The celebrated legal practitioner stated that he would apply for 'an order of mandamus' to make EFCC discharge it's function, if the agency doesnot grant his request.

Here are societynowng.com's background links to this development."

...additional report The Punch
Posted by MAN ABOUT TOWN at 2:32 AM