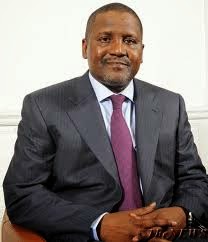 Internationally listed man of means, Alhaji Aliko Dangote is accused of illegally taking over some lands - in connivance with government officials - to perfect his celebrated big money petrochemical plant.

Here are details of the development as provided by news portal, saharareporters.com

"Many residents of Idasho community in Ibeju-Lekki local government area in Lagos have accused the local council chairman, Wasiu Ogidan, of acting as proxy for billionaire businessman Aliko Dangote in a scheme to take over their land without compensation.

Several landlords in the disputed area alleged that Mr. Wasiu Ogidan had called a series of meetings with them in the guise of seeking to resolve conflicts over their land that Mr. Dangote is eyeing as the location for his new petrochemical plant.

But they accused the local council chairman of acting in bad faith, and of undermining their interests in a secret scheme with Mr. Dangote, a powerful businessman who has been named by Forbes magazines as one of the wealthiest men in the world.

“While calling meetings with us, the local government chairman goes behind our back and tells Alhaji Dangote to continue with construction of his plant on the site,” one of the landlords alleged. He added that Mr. Ogidan “even assures [Mr. Dangote] that the villagers have agreed to leave their land.”

The landlords also claimed that Mr. Ogidan had also assured officials of the Lekki Free Zone that the community’s land was free for their annexation and use.

The villagers said that, while Mr. Ogidan persuaded them to relax, offering assurances that they would be compensated for their land, they found out that Mr. Dangote’s firm had commenced construction on their land. “We have not discussed the issue of compensation, so why are they going ahead with construction?” one of the landlords queried.

The construction, which has now progressed significantly, is currently being done deep inside the forested parts of the disputed land. The expectation is that the construction would extend outwards, said the villagers, who added that they accidentally stumbled upon the construction crew in the thick forest. They said the workers on the site claimed that the local council chairman, Mr. Ogidan, had stated that the conflict over the land had been resolved.

“None of [Mr. Ogidan’s] meetings with us had any concrete conclusion, but he went and told the construction people that we had agreed,” one landlord complained.

The landlords accused the Lagos State Governor, Babatunde Fashola, Mr. Ogidan, and Mr. Dangote of lawlessness and recklessness. They noted that the disputed land was still the subject of fierce legal exchanges in court, but accused Mr. Dangote of using several government proxies to deceive the villagers that the land dispute was over.

Several villagers warned that a crisis was likely to arise if the Free Zone workers failed to stop the surreptitious movement into their land until the legal dispute is resolved"
Posted by MAN ABOUT TOWN at 12:15 AM