Governor Of Osun State, Rauf Aregbesola is back at the top of news items. and it is yet as a result of another emerging controversy. 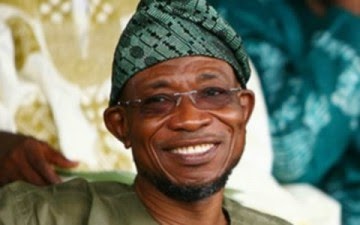 Here are details of the fast becoming popular happenstance
.


'The operatives of the Economic and Financial Commission are investigating allegations of misappropriation of funds and abuse of office in Osun State.

Investigation revealed that operatives of the commission quizzed the Accountant General and the Permanent Secretary, Ministry of Works, Messrs. Alaba Kolawole and Adeagbo Nurudeeen, respectively, on March 23, 2014, in relation with the ongoing probe involving contract awards running into billions of naira.
A source at the commission said that the accountant general and the permanent secretary were interrogated in relation with alleged mismanagement and diversion of public funds.

The source said that the money in question were proceeds from bonds accessed by the state government for the development of public infrastructure in the state.

'It was gathered that the two top government officers were granted administrative bail, pending the outcome of the ongoing investigation.

It was further learnt that the commission is also investigating the Commissioner for Finance, Wale Bolorunduro, and the Senior Special Assistant to the Governor of Osun State on Economic and Financial Matters, Mr. Titus Babatunde, in relation with alleged diversion of public funds.
Calls put across to the telephone of commissioner  for finance were not answered and a text message sent to him was yet to be responded to.

But the Media Aide of the Governor, Mr. Semiu Okanlawon, said that the probe was not new.
He said that Governor Rauf Aregbesola announced that the EFCC was probing the finances of the state at a public function during the inauguration of RLG in Ilesa in February.

He said, “ It is not as if somebody is just telling us. There is nothing new about the probe. The governor announced this at a public function in Ilesa when the RLG was inaugurated.

The source said that Babatunde and Bolorunduro are alleged to have frittered away N7.6bn on the rehabilitation of schools also being rehabilitated by the Universal Basic Education Scheme, through the state educational infrastructural project.'