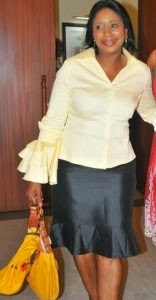 This is happy news coming from the path of low profile legal mind, Mobola Akinjide.

'Many years after the crash of her marriage, famous society lady, Mobola Akinjide has found love again. She is now married to Adedapo Ayoola, a former businessman turned pastor.
Mobola is the first daughter of Second Republic Attorney General of the federation and Minister of Justice, Chief Richard Akinjide, and the elder sister of Jumoke Akinjide, the Minister of State for the federal Capital Territory, FCT. The lawyer-trained lady had been in two previous unions, which both ended on sour note.
Her first marriage was to Fade Ajao, with whom she had three children, Tokunbo, Adeola and Leke. It crashed in the early 90’s.

Her second attempt at marriage was with Wole Ojuri, a businessman. It was blighted by allegations of infidelity and this eventually saw her being sent packing from her Omole, Ikeja matrimonial home.
Mobola, who used to lead an active social lifestyle, has withdrawn into her cocoon and become a born again Christian. Some of Mobola’s friends mirthfully say that it is easier to find her at the headquarter of Mountain of Fire, MFM, than any other place. At a point, Mobola delved into the importation of palm oil from Malaysia.

She is now a full partner in the law firm of Akinjide and Co. Solicitors.'
Posted by MAN ABOUT TOWN at 4:30 AM