Lagos Commissioner, Ademorin Kuye In Street Brawl That Turned Free For All!


Lagos Commissioner, Ademorin Kuye is one of the trending personality on social media at present.

But he attained this feat for conducts that taints his position and government that is very particualr about it's image that he represents and works for.

He was involved in street brawl that resulted in a free for all.

Here are details of the unbecoming incident.

On Friday, April 4, Barrister Ademorin Aliu Kuye, the Lagos State Commissioner for Local Government and Chieftaincy Affair, turned a political meeting into a boxing arena. He descended on a fellow politician, Honourable Olugbenga Hakeem Abdullahi (aka Naa Gbenga), and landed him some blows in the face. Abdullahi’s offence? He had dared to question Kuye’s rationale for moving a motion for the imposition of candidates instead of going through the due process of screening.

The political meeting which took place at the Somolu Local Government Banquet Hall, had in attendance, several respected leaders of the All Progressives Congress, APC, such as Senator Anthony Adefuye. It was in the presence of this revered politician that Kuye was alleged to have displayed his Tyson-like boxing prowess. According to eyewitness’ account, Kuye, who is a former Chairperson of Somolu  Local Government Council, was attempting to impress it upon the gathering to support his motion that candidates for the forthcoming Ward Congress should be exempted from screening. Evidently, Kuye’s motion didn’t sit well with the other politicians and they voiced out their protestation. This was said to have drawn Kuye’s ire. Abdullahi, who was sitting close to Kuye, had attempted to caution him on the implication of his motion on the party, when he (Kuye) turned to him and landed him a couple of blows on his bespectacled face. Abdullahi, 57, who was totally taken aware by the attack was said to have fallen flat on his back. In the ensuing melee, some of Kuye’s thugs, who were lurking around, stormed the meeting venue and dealt Abdullahi more blows. Needless to say the meeting came to an abrupt end, as everyone scampered off to safety. Some of Kuye’s thugs who stormed the venue were identified as Yesuru and Benson. Yesuru is described as a very notorious thug, and was recently declared wanted by the police in Somolu. 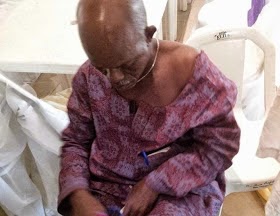 Interestingly, Kuye, who flaunts a Post-Graduate Diploma in Theology from the Redeemed Christian Church of God, RCCG, is described as a very violent politician. Four years ago, he was alleged to have beaten a former party colleague, the late Tunde Babalola into a state ofComa. Also, several cases of Kuye invading political meetings with his thugs abound within his Constituency.

Meanwhile, Kuye’s victim, Abdullahi, who is nursing a swollen face and some cuts on his face, has vowed to seek for justice. In his quest to see that Kuye is brought to book, Abdullahi together with some party leaders in Somolu, had reported the assault to Alade Police Station, Somolu. Also, the aggrieved politician has also filed a petition to the Panti Police Station and plans to send the petition to the Lagos State Governor, Babatunde Raji Fashola, Asiwaju Bola Tinubu and other APC leaders.'
Posted by MAN ABOUT TOWN at 3:14 AM