Less than a year after the death of his wife, Adunni – the 76yrs old father of former speaker of the Federal House of Representatives Dimeji Bankola – Alani is expecting a new baby from his youngest wife. 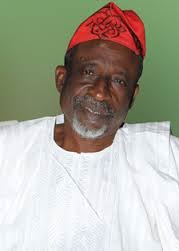 
One of the wives of Chief Alani Bankole is at the moment heavy with another pregnancy albeit her second for the Egba tittled chief and she may put to bed any moment from now.

According to Yemojanewsng.com the 76 year old husband aristocratic title holder of Oluwo Iporo Ake and Seriki Jagunmolu of Egbaland is anxiously expecting another bundle of joy  from Bola Ewebiyi, the 28 year old graduate of Olabisi Onabanjo University, who our source said the respected politician always dot on.

Recall that the father of the former speaker of house of representatives, Hon. Dimeji Bankole sometime in year 2012 alongside few of his close friends went to Bola’s parent house in Ikorodu, Lagos where a secret and brief traditional marriage was conducted when the Olabisi Onabanjo University graduate who was 25 years old then was with the pregnancy of her first child.

Apart from Bola who lives with the Politician there is another woman whom he married at the same time with Bola, the other woman delivered also in 2012. Chief Alani Bankole eldest wife, Iyalode Adunni Bankole died earlier this year
Posted by MAN ABOUT TOWN at 6:46 AM