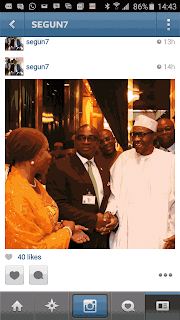 Segun Awolowo junior has a new play ground - and it is the social media.

The game he plays is competing for attention
.

The rich take their pleasures sadly, after the fashion of whatever seems to be trendy. Hence it is not in habit but in novelty and the passé that many a man pursues vainglory and pleasure. But what manner of vain gloriousness would drive Segun Awolowo Jnr, the publicity-loving  grandson of late Chief Obafemi Awolowo, to engage in a desperate jostle for the limelight? What shade of vanity would drive him to engage in intense competition with local stars on the narcissist's coven called INSTAGRAM, for social correctness and youth appeal?

Perhaps the type that drives the proverbial old woman to channel and relive the pleasure of youth and her famished beauty in grandiose and evanescent dreams. As you read, Segun is engaged in a feral and frantic hustle in the now fashionable quest for the juiciest portion of the spotlight on the social medium.

Segun’s photo ops with President Buhari, Vice President Osinbajo and some governors are been posted on various social media by Segun himself, especially on his Instagram page, as you read.  Whatever the colouration given to the story of his meeting with these men in power, truth is, Segun in desperation to be part of the loop and his juvenile quest for social appeal embarked on a social buff up and image waxing venture in order to beat the local artistes at the game and if possible, outshine them.

Segun has devised means to perpetuate his hankering for elitist consumption and status enhancement, and if it means seeking or buying an audience or photo ops with the crème of Nigeria’s powerful men, so be it.


Interestingly, however,  where was Segun when President Buhari was a pitiful presidential hopeful and Vice President Osinbajo was just an ordinary citizen? Segun is just an attention seeking man whose claim to fame was being the grandson of Awolowo. Perhaps friends and family with his best interest at heart will stage an intervention soon for his sake and persuade him to quit his infantile lunge for relevance and the spotlight.