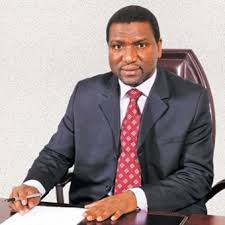 Financial institution, Union Bank has appointed a receiver manager to liquidate Dangote’s Dansa foods as parts of efforts to recover a N4billion debt.

Union Bank Plc have taken over Dansa foods limited managed by Alhaji Sani Dangote younger brother of Africa’s richest man Aliko Dangote The commercial bank appointed a Lagos Lawyer, Barrister Chukwudi Enebeli of Pinheiro and company as Receiver/Manager over Dansa foods limited, the takeover was as a result of inability of Alhaji Sani Dangote to pay back a loan of N4billion he obtained from the bank.

The Receiver/Manager is to take over all assets of Dansa Foods limited a company incorporated in Nigeria and having its registered office at 1, Dansa Drive off Badagry Expressway, Abule Oshun Lagos as a charge was created in favour of Union bank over all fixed and floating assets of the company to secure the monies expressly borrowed. The Deed of Debenture appointing Mr Chukwudi Enebeli of Pinheiro and company 8A Taiwo Koya street. Ilupeju Bye- Pass Lagos has been filed and registered with Corporate Affair Commission at Abuja.

Meanwhile, due to the resistance of the Directors of Dansa foods company to allow the Receiver/Manager to perform his duty of running the company smoothly, the Receiver/Manager Barrister Chukuwudi Enebeli alongside Union bank of Nigeria Plc and Dansa Foods limited in Receivership dragged Alhaji Sani Dangote and three other Directors of the company Alhaji Abdulkaarim Lawal Kaita, Alhaji Ahmed Shehu Yakasai and Alhaji Mohammed Sani Dangote before a Federal high court in Lagos, seeking an order to take over the management of the company without hinderance.

In an affidavit sworn to by Mrs. Olorunfunmilola Ayoola, head Food team of Union bank ,filed and argued before the court by Mr. Kemi Pinheiro SAN, the Deponent averred that sometimes in 2008 Dansa Foods Limited was at its request granted loan of N5,200,000,000 by Union bank plc

The loan comprises of the following:

The loan was disbursed to Dansa Foods company and fully utilized by the company. The company duly executed a deed of all assets debenture in favour of Union bank. However the company has failed to liquidate its indebtedness to the bank despite the services of several demand letters by the bank and its solicitors on the company.
Posted by MAN ABOUT TOWN at 6:40 AM