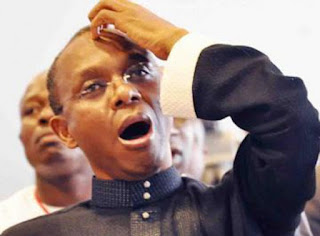 Kaduna State governor, Mallam Nasir El-Rufail, has boasted that he was already a dollar millionaire long before he joined public service.
The governor who was reported by a national newspaper to own over N90bn asset, and acquired the fancy ones among them while he was in public service as Director General of the Bureau of Public Enterprises and Minister of the Federal Capital Territory while refuting the report in a statement released by his media aide, Samuel Aruwan, said he was already rich before he joined the service.
Married to three women, the quantity surveyor turned politician stated that he made million dollars in private practice.
He said, “Malam Nasir El-Rufai is a privileged Nigerian. He qualified as a chartered Quantity Surveyor early in life and became a dollar millionaire in his twenties.
“He is a respected leader in his professional field but as successful as he has been in his career, he certainly has neither N90 billion nor 40 mansions.
“He will not be distracted from his total focus of making Kaduna great again. In this endeavour, he will continue to be accessible to practitioners of responsible journalism,