How Ooni Of Ife, Oba Okunade Sijuade Embarked On Journey Of No Return

Ooni of Ife, Oba Okunade Sijuade has joined his ancestors. 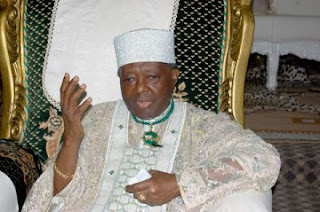 And the manner he embarked on this journey of no return is now unveiled.

Details emerged in the wee hours of Wednesday on how the Ooni of Ife, Oba Okunade Sijuwade Olubuse II, joined his ancestors on Tuesday evening.

Oba Sijuwade was said to have breathed his last at about 7:30pm on Tuesday.
He was 85-years-old.

He died in a hospital, Saint Mary’s Hospital, Paddington, London, United Kingdom, where he was reportedly flown to about five days ago unconscious.

The Punch in a report on Tuesday night said the revered monarch was flown to London from Ibadan, the Oyo State capital, in an air ambulance.

A source told The Punch: “Kabiyesi was flown out of the country about five days ago in an air ambulance. He was unconscious; his situation was critical.

“As a matter of fact, some people have been weeping in the palace since the weekend because of his situation when he was flown out from Ibadan in that air ambulance.”

One of the late Ooni’s sons, Adegbite, is set for his traditional marriage with ace television presenter and actress, Dolapo Oni.

The wedding has been scheduled next Sunday.

The wedding introduction a few days ago at the Oni’s family compound in Lagos.
Oba Sijuwade was born on January 1, 1930.

He became the fiftieth traditional ruler of Ile-Ife in 1980.

The ceremony was attended by several prominent persons, including the representatives of the Queen of England.

He was born in Ile-Ife to the Ogboru ruling house and was grandson of the Ooni Sijuwade Adelekan Olubuse I.

He worked for three years in his father’s business, then for two years with the Nigerian Tribune, before attending Northampton College in the United Kingdom to study business management.

By the age of 30, he was a manager in Leventis, a Greek-Nigerian conglomerate.

In 1963, Oba Sijuwade he became Sales Director of the state-owned National Motor in Lagos.

After spotting a business opportunity during a 1964 visit to the Soviet Union, he formed a company to distribute Soviet-built vehicles and equipment in Nigeria, which became the nucleus of a widespread business empire.

He also invested in real estate in his home town of Ile Ife.

By the time Sijuwade was crowned Ooni in 1980, he had become a wealthy man.

...theeagleonline
Posted by MAN ABOUT TOWN at 1:13 AM