It was anti-climax yesterday in the Senate. The speculated plot by some Senators to engender the suspension of Senator Kabiru Marafa failed to materialise. 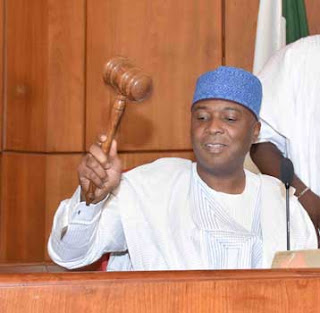 The Senate resolved to refer Marafa, who represents Zamfara Central Senatorial District to its Ethics, Privileges and Public Petitions over alleged uncomplimentary comments against the institution of the Senate.

Instead of the reported suspension, protesters took over the gate of the National Assembly.
They demanded the resignation of Senate President Bukola Saraki.


Although, Chairman of the Ethics and Privileges Committee, Senator Samuel Anyanwu submitted the committee’s report on alleged Marafa’s misdemeanor, the report was not considered.


Some Senators claimed that the report was not considered “for some obvious reasons” without saying exactly what amounted to “obvious reasons.’

The title of the report of the investigation of Marafa, which was the eight to be received by the Senate yesterday simply read: “That the Senate do receive the report of the Committee on Ethics, Privileges and Public Petitions in respect of the complaint from Senator Isah Misau and two others against Senator Kabiru Marafa over a publication on February 7th 2016 and for allegedly misleading the public against the Senate and the National Assembly.”

Immediately Anyanwu laid the report as required by the Senate rules, there was heightened tension especially in the Senate gallery that the report would be considered to pave the way for the suspension of the Zamfara lawmaker.

That was not to be as the Senate considered a few other reports and apparently kept the investigative report on Marafa in view.

When the committee met on Monday, Marafa was absent forcing members of the committee to go into a closed session to take a position.

Also, the prime mover of the motion that led the Senate to resolve to investigate Marafa, Senator Isah Hamma Misau was absent.

Senator Mathew Urhoghide, who seconded the motion appeared before the committee to defend the motion.

It was not clear when the report would be considered but some insiders noted that considering the high wired politics associated with the issues raised by Marafa in the alleged offensive interview, the Senate might take its time before considering the report.

It is also not clear what the Senator Anyanwu Ethics and Privileges Committee recommended to the Senate.

A source said that the committee might have taken exception to Marafa’s absence at the investigative hearing on Monday to ask the Senate to reprimand him.

Another source noted that “Marafa is likely to escape severe punishment especially when only four members of the committee out of a total of 11 members attended the investigative hearing on Monday.”

Yet another source said that the controversial report might be considered today “due to its urgency and need to reassure Nigerians that Saraki is still in charge of the Senate.”

The group of protesters under the aegis of Open Society Coalition and Good Governance Initiative, demanded for the immediate resignation of Saraki “in order for him to focus on his trial at the CCT.”

The group displayed banners with various inscriptions such as: “Suspend Saraki, not Marafa”; “Stop suspending members, leave the Senate and face CCT”; “Democracy survives in inclusiveness, not in suspending people of different opinion”;  and “National Assembly, centre of Democracy not Fascist centre.”

Coordinator of the group, Mr. Emeka Ude, told reporters that the planned suspension of Marafa was undemocratic.

He said that the suspension of Marafa would dent the image of the Senate and portray the upper chamber as an institution that is opposed to free speech.

Ude said, “Democracy thrives where there is fairness, rule of law, freedom of expression among others.

“In a situation where the legislature is foreclosing the democtatic space, that is an invitation to Fascism”

He noted that Saraki should encourage others with contrary views instead of trying to suppress them through threat of suspension.

Asked why they were clamouring for the resignation of the Senate President, Ude said Saraki was standing criminal trial before the Code of Conduct Tribunal.


He also faulted the referral of the alleged Marafa derogatory comments to the Senate Ethics Committee saying it showed Saraki had made up his mind to punish Marafa.
Posted by MAN ABOUT TOWN at 10:23 PM