Indications emerged yesterday that the kidnappers of three schoolgirls of Babington Macaulay Junior Seminary (BMJS), Ikorodu, Lagos might have reduced the ransom amount. 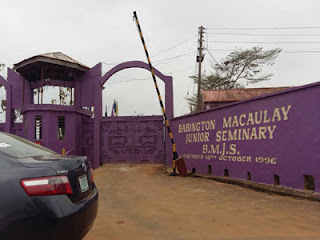 It was learnt that the criminals who made another contact at about 2a.m with one of the victims’ parents, reduced the amount to N10million from the N200million they initially demanded.

Some parents who were at the school premises to see their wards told our reporter yesterday that they were briefed by the authorities that negotiations were ongoing and that the girls were healthy.

This development however contradicts earlier claims that one of the girls had taken ill.

Father of one of the kidnapped girls Ven Victor Ayo Olusa, said they are praying for their release.

The cleric, who is also the Executive Secretary, Lagos Anglican School Management Board, which oversees the running of the schools owned by the Anglican communion, including BMJS, said: “The update is that they are still in the kidnappers den and we are trusting God; and the church is praying and the security agencies are working.  We are putting our faith in God.”

It was learnt that the abductors also gave the school specific location to drop the agreed ransom.

According to the parents who refused to be named, the school was hopeful and prayers were been intensified “so that God will touch the kidnappers to release the girls unhurt.”

They said the security forces had advised the school authority to be calm and avoid giving out information on the issue because some of the kidnappers might be hanging around to give feedback those suspected to be hiding in the creeks.

Sources said the criminals might have taken the girls to the Arepo Creeks. But this could not be confirmed

It was also learnt that Inspector General of Police (IGP) Solomon Arase has deployed the Quick Response Team (QRT),to join the Lagos Police team to rescue the girls.

“We came to see our children. They told us that they were negotiating. They did tell us what has been offered nor what was agreed on. But the school assured that the abducted girls are well and will return safely,” said one of the parents..