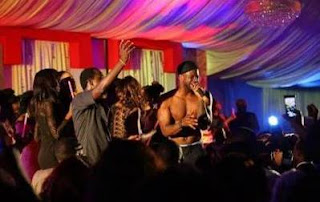 Peter Okoye of Psquare went on a solo performance at a night club in Abuja over the weekend fuelling rumours of Psquare duo splitting..

The singer recently dropped a single titled 'Look into my eyes' which had a lot of people reading meaning into the song and relating it to an impending breakup of Africa's most decorated singing duo.

The singer who now goes by the name Mr P and has come out to be under a new management also been further gathered that Peter will be performing alone on April 7, 2016 at Dubai.

With all these in their faces, Paul got all emotional and wrote in an Instagram post that he wishes their mother were still alive to help out in these trying times.
‘’I wish you were around, now I understand what this life is without having a mother’’ Paul wrote.

The Pop duo Psquare are unarguably one of the biggest music acts to have come out of Nigeria and Africa. Having been active in the industry since 2003, with six studio albums and numerous awards bagged, such as the MTV Music Video Awards, winning that twice, international collaborations with the likes of Akon and T.I, the dynamic duo have come a long way.

Peter however seems to have gotten more recognition and fortune with solo endorsements coming his way from the likes of Olympic Milk and Adidas, with reports that he is starting his own beverage company among others under his P-Classic Group (PCG).

Paul on the other hand according to pulse.ng tried to float a transport business but failed due to unfamiliar terrain constraints even after purchasing some vehicles to commence the business.

He has however started up his record label Rudeboy records with Muno as his first signed act.

stelladimokokorkus
Posted by MAN ABOUT TOWN at 5:17 AM