Aviation workers, under the National Union of Air Transport Employees (NUATE), have threatened to shut operations of Caverton Helicopters in Lagos, Warri and Port Harcourt over unpaid salaries. 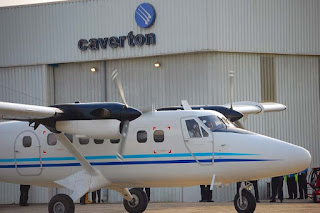 Aviation unions have been negotiating with the airline on issues, ranging from arbitrary slash of salaries, injustice to workers and disregard for labour laws.

The notice was contained in a statement by Olayinka Abioye, acting general secretary of NUATE and copied to the branch chairmen of Warri, Port Harcourt and Lagos.

The union said there shall be no further discussions on the matter, as efforts to resolve it have proved abortive.

The statement reads : “Notice is hereby given to the public and particularly, the clients of Caverton Helicopters, that due to persistent anti-labour practices of management of the company, the unions have resolved to shut operations of the company in Lagos, Warri and Port Harcourt in seven days, if salaries of our members are not reinstated.

“There shall be no further discussions on these issues, as the unions have exhibited a high sense of responsibility and maturity in getting the matter resolved but to no avail. This message serves as a final notice of industrial action. Caverton Helicopters workers are to note and be prepared.”

A source said  the situation had worsened since  last September when management cut salaries without recourse to the workers or unions.

” When this happened, the unions met with management, which said the cut in salaries was as a result of the prevailing oil crisis. But the union found out that the cut was not holistic, and was done putting sentimental interest in the fore.

“In  fact when management heard that due to their action there might be an upheaval, they rushed in and started doing selective gratification by paying the sons of the soils, the indigenes or what you can call workers from indigent communities, leaving out those that did not come from there.”

“Non-indigenes have got nothing and as we speak those in Lagos still work under the same conditions and I want to believe the union has exhausted all avenues to resolve the matter. Imagine Caverton asked 30 workers to resign. The union waded in and they discussed to let them go on the grounds of redundancy. But as we speak most of them have not been paid.

The company’s Managing Director, Mr. Josiah Choms, said the company only reduced workers salaries, but that salaries were up to date