Osinbajo Back From 1hr Meeting With Ailing President Buhari In London 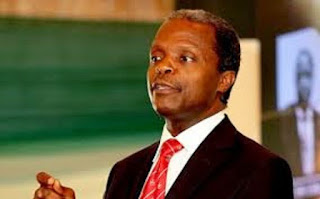 Acting President Yemi Osinbajo spent one hour with President Muhammadu Buhari on Tuesday in London and then swiftly left to begin the journey home.
According to
Reuters, Osinbajo arrived in the night at the Abuja House, where Buhari has been living since he arrived 8 May, from Nigeria for medical vacation.

Osinbajo spent one hour and left without making any comment on his meeting with President Buhari.
Spokesman for the Acting President tweeted after the visit that information about what transpired will be made known soon. He said “it was a good meeting”.
Akande had announced the visit Tuesday night and that Osinbajo would return immediately after. A Federal Executive Council Meeting takes place every Wednesday in Abuja.
“Osinbajo meeting with President Buhari in London today, and returning to Abuja immediately afterwards,” the vice president’s spokesman, Laolu Akande, said in a Twitter message posted earlier on Tuesday. No details were given.
President  Buhari, 74, left Nigeria the night of 7 May after welcoming a group of 82 Chibok schoolgirls released by the  militant group Boko Haram.
It was President Buhari’s second medical visit to Britain this year. The first began in January and lasted nearly two months.