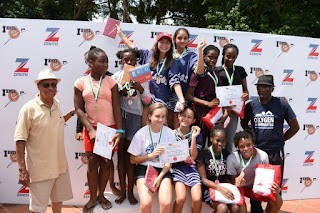 Grange, which had a week earlier also took first position in the Primary School category, was steered to victory by
Kishi Deji-Roberts who amassed four gold medals to bag the MVP award for the girls.

Tosan Obatoyinbo of BIS also had a great impact on the tournament which had about 30 events as he was voted the MVP for the boys after scooping four gold and two silver medals.

The Group Managing Director of Zenith Bank, Peter Amangbo, thanked Ikoyi Club for the opportunity to sponsor the tournament, saying it has helped to identify and nurture future swimming stars.

“Zenith Bank identifies sports as a very key component of our unity as a nation. We also acknowledge that Nigerians love sports and this formed our resolve to keep supporting sports as it helps to build a healthy society. This tournament is getting bigger and better by the year and we are happy to be part of this great project,” Amangbo said.

Section captain, Oloyede Obatoyinbo pledged that Ikoyi Club will continue to work towards the development of the sport noting that some of the talents discovered will be encouraged to move to the next level and help take Nigeria’s rightful place in the sport at continental and international stages.

He added: “At the primary event the standard was encouraging while the secondary category was equally fantastic. This goes to show that we have talents that can compete at the world stage. What is needed is the state, corporate and individual support and we are happy that Zenith Bank is investing in these kids who are going to be the stars of swimming in the nearest future.”