‘’I Am Delighted That The Senate Stood Up’’ Saraki Speaks On Members Reaction To Thugs Invasion, Stolen Mace 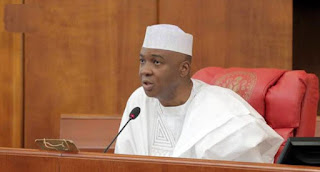 Senate President, Dr Bukola Saraki, has commended the leadership and members of the Senate for standing  firmly in defence of democracy and the rule of law with their decision to defy those who attacked the Red Chambers of the National Assembly during which the mace was forcefully taken away.


Saraki, speaking from Washington where he is attending the Spring Meeting of the World Bank/International Monetary Fund (IMF), also lauded the swift reaction by the leadership and members of the House of Representives in demonstrating their solidarity with the red chamber.
“I have just been informed that some hoodlums invaded the Senate chambers, forcefully taken away the mace and assaulted some of our Sergeant-at-arms on chamber duties. I am delighted that the Senate stood up to them by disregarding their unreasonable and shameful action and went on with the day’s proceedings as slated in the Order Paper.
“My commendation goes to my deputy, Senator Ike Ekweremadu, other members of the leadership, my colleagues, the leadership and members of the House of Representives for standing in defence of democracy, parliamentary sanctity and constitutionalism.
“With the way the Senate has defied those seeking to undermine it, we have sent out a strong signal that we are always ready to defend our constitutional mandate and nothing will deter us from this.
“I associate myself with the comments of the Deputy Senate President that we are ready to get to the roots of this assault on democracy and ensure that those who are responsible, no matter how remote, will be brought to justice”, Saraki stated in a statement by his Special Adviser on Media, Yusuph  Olaniyonu
Posted by MAN ABOUT TOWN at 12:18 PM