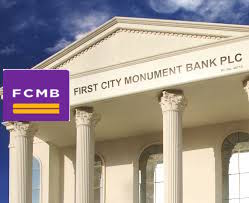 The Adam Nuru led management of First City Monument Bank (FCMB) is currently enmeshed in a financial scandal, that they have almost succeeded in getting majority of Nigeria’s prominent newspapers and online news platform from reporting the outcome of a suit slammed
against them by Zumax Nigeria Limited, who dragged them before the Lagos State High Court, for diversion of their funds. FCMB according to court documents (LD/1668/2009 – Zumax Nigeria v FCMB) and FCMB own documents seen by Secret Reporters detailed how the bank diverted N250 million of Zumax, kept with them.

This prompted the company to petition the Economic and Financial Crimes Commission (EFCC) who invited the bank for questioning. Typical of a fraudsters lifestyle, FCMB lied to the anti graft body that Zumax was indebted to them by N465 million. Documents however revealed that contrary to FCMB claim, Zumax was owing only N321 million, which is exclusive of the N250 million diverted by the bank as well as over N182 million which they deducted as bank charges and interest rate. Not convinced by FCMB claim, the oil servicing company requested for their account statement, beginning from the day they started transaction with the bank.

Apparently knowing that they have stolen from Zumax, the bank refused to honor the request, against the banking policy. In documents owned by FCMB, it revealed how they recovered over N1 billion of Zumax money and went ahead to float a company called ZR to divert the money to, as well as monies paid by Chevron for the contract they executed for them. Once the case was adjourned, with the court satisfied that even the witnesses from FCMB as well as the audit department could not give valid claims to why the diversion took place, the hammer struck.

The Honorable Judge ruled that FCMB has truly defrauded the bank and lied under oath before the court. While reading the judgment, sources in the court revealed that the bank sensing the language used by the Judge rushed out to meet Journalists present not to make any report if the ruling does not favor them, while reaching out to other journalists who were not present, pleaded with them not to go to press with it.

Finally, the judge ruled in favor of Zumax Nigeria Ltd and directed FCMB to pay every penny owed the company. When Secret Reporters contacted the media relationship manager of FCMB, Mr Rafiu Mohammed to give the bank’s official statement on the ruling which has been kept away from the press, he promised to find out details from the department in charge and revert back. He never did till press time. Zumax Nigeria Ltd in responding to us stated that “We have immediate issues we are resolving at the moment. Please revert in 6 weeks”, to which we replied that we are hitting the press with our story and only reached out to confirm the judgment, which they didn’t deny.
Posted by MAN ABOUT TOWN at 4:42 AM