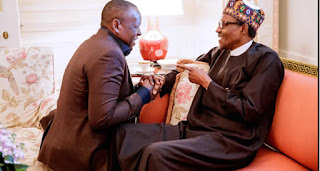 Honestly, you couldn’t have forgotten so soon, the fortune-hunters that misled former President Goodluck Jonathan, later deserted him even after they gobbled the feed with the cart and the left-over. Immediately Jonathan lost the election, businessmen and women passionately retracting heart-felt paternosters they made for his sake; it is only Jonathan out there, only him in the cold. They have all dumped him like a bad habit.
Yes, very smart Tope Sonubi who is better known as one-third of the Sahara Energy triumvirate including Tonye Cole and Ade Odunsi, was very close to Jonathan Goodluck. Tope is arguably
one of those alpha-males who refused to be daunted by their limits and the lure of easy money. A successful young man whose storied and sensational life would make many of his peers feel like they came to the world at a wrong time.

Starting out life as a taxi driver in London, Sonubi soon met a top shot of the Nigerian National Petroleum Corporation, NNPC, Alhaji Haruna Abubakar, who would make Tope his choice driver whenever business or pleasure brought him to the Queen’s Land.
A brilliant young man with a clinical business vision and uncomplicated moral background, he soon became an intellectual sparring partner of Abubakar who would later invite him back home. From that point on, his life became more meaningful. He was introduced into the oil business and started selling to a number of companies including Wale Tinubu’s OANDO.
Business was good and before long, Tope became a looming fixture among the jet set and bourgeoisie, the powerful and popular.  Then, in 1996, alongside Tonye and Ade, they started Sahara Group which incubates companies like the Sahara Energy Field, Sahara Gas, Sahara Farms, and Sahara Trade and Sahara Bulk Storage Facilities among others, all of which have their core fields of endeavour centered within the oil and gas industry and its associated sub-sectors.
However, Tope Sonubi, Ade Odunsi and Tonye Cole were some of the few oil magnates who benefited immensely from former petroleum minister, Diezani Alison-Madueke sleazy administration, no doubt.
Yes, call her a painted devil but Diezani Allison-Madueke made a lot of men, turned their star-less nights to bright days, when she was in power. Beyond her two major cronies, Kola Aluko and Jide Omokore, there are so many young businessmen who made a kill under her and if permitted then, would have killed for her. Alas, life has happened. She is no longer the saviour of yore. In fact, she is now a pariah. Those who wined and dined with her in the good days have gone into hiding not wanting to be seen or associated with her.
However, as it was in the days of old, so shall it be till the end of life. The marriage of political leaders with moneybags is a union that has been with us since the word ‘democracy’ found its way into human affairs. From Wall Street’s to Dow Jones, business moguls have always courted friendship of powers that be, for no better reason that protecting their economic interests. It is against this background that the image of Tope kowtowing to President Muhammadu Buhari far away in the United States does not come as a surprise.
In actual fact, Sonubi has history of obsequious genuflections that predated the image presently making some buzz in Nigeria’s blogosphere. Sonubi was one of the few dudes who had unfettered access to the immediate past president of Nigeria, Jonathan Goodluck; and his access came with such kneeling, genuflecting postures every moment he came across the him, even if it was ten times in a day.


Sonubi’s public show of deference to President Buhari has set many tongues wagging. While many are reading political meaning to it that Sonubi, together with his partner-owners of Sahara Group, might have thrown his weight behind President Buhari re-election campaign, and as such, would be oiling the ambition with huge financial resources; others reason that with Sahara Group’s latest wider spread of its nets beyond Nigerian shores, Sonubi’s trip to US might just be for pure economic reason which requires some presidential backing.
Posted by MAN ABOUT TOWN at 7:16 AM