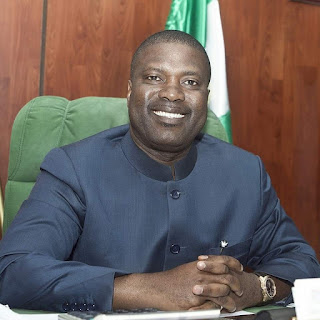 If there is an angel in Ese Ekere, only her husband, Nsima Ekere, Managing Director of Niger Delta Development Commission, NDDC, enjoys the good pleasure of her (the angel)’s company. To some staff of NDDC, Ese looms large and domineeringly, like
the legendary Cleopatra.

Cleopatra VII Philopator, known to history simply as Cleopatra, was the last active pharaoh of Ptolemaic Egypt and in her wake, an immense cache of literature celebrating at once, her notoriety and loveliness, captivates the world, even as you read.
Could Ese be truly likened to the legendary Cleopatra? Ask the beleaguered staff of NDDC. Although she holds no legitimate position of authority in the organization, the fear of Ese is the beginning of wisdom.
Sources within the NDDC lament that the affairs of the Organization are currently under the control of two people namely, Nsima and his better half, Ese. Sources allege that she has suddenly become the unofficial powerbroker and favour dispenser in NDDC before whom every contractor who has any business to do with the Commission, has to genuflect in order to enjoy the Nsima’s good graces.
Her influence is so overwhelming that even official members of staff tremble at her sight as she brooks no disrespect or dissent from any one, no matter how highly placed he or she may be.
Her word, they say, is law as senior officials fall over each other to pay homage to her while she flaunts her influence and expensive wardrobe of trendy robes and jewelries not hitherto seen on her.
Little wonder, many worship the ground she treads on while praying and hoping that they don’t incur her wrath because her word is law.
We have sighted her in a few upscale shindigs, most times in the company of her better half, Nsima. She always very happy, betraying a permanent smile of contentment. We don’t begrudge her. She has weathered the storm with Nsima from the days of nothing before he became the deputy governor and now that there is so much, why should she not enjoy herself?