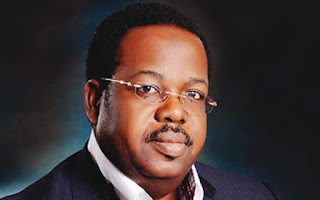 Yes, The colours of the day on both sides were “Daffodil yellow with copper gold and metallic silver with multi sequin. Like a fairy tale come to life, Damilola, the son of billionaire former banker and property tycoon, Bisi Onasanya, got
married last Saturday to Surat Oluwakemi Lawal, the beautiful daughter of Chief Razak Tunde Lawal and Mrs. Florence Irona Lawal in a  traditional wedding ceremony that was as extravagant as it was expensive. Held at the prestigious Landmark Event Centre, Lagos, the banquet hall, luxurious and expansive on its own, was taken to a new level of extravagance with flower and light decorations covering up the entire space including the ceiling, walls, and pillars.

The result was a perfect fairy-tale scene. In the midst of splendor rarely seen in this part of the country, the bells pealed, crowds cheered, the expensive flowers that ornamented the venue bloomed like it was in its habitat at winter. Bisi, the former MD of First bank, who is now the owner of The Address Homes, has shown that in or out of the banking sector, he is still a man of his people.
This much came to the fore during the wedding. Besides being intimidatingly solvent, Bisi lives a charmed life. No sooner did he retire from First Bank than he relocated from his Ikoyi residence to a sprawling mansion on Banana Island, in Lagos. At his new mansion, Bisi has on display, the choicest and most expensive automobiles. And just recently, he added 2017 models of the most expensive auto brands to his fleet of cars.


The former bank MD understood quite early in life, that there are no little ways to imbue his life with grandeur. He understood that money matters in the mix, in his pursuit of ease and luxury. Thus he pursued money as the only sunbeams that lights his path to grandeur. Nothing is black where it shines. That is why his life is radiant with light. He spared no expense to gift his son a befitting wedding.And the white wedding is taking place in Dubai, the UAE next weekend
Posted by MAN ABOUT TOWN at 2:10 AM