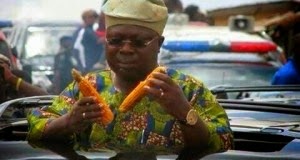 The campaign train of growing in popularity People's Democratic Party candidate in the upcoming gubernatorial election in Osun state, Otunba Iyiola Omisore just suffered severe rejection in a part of the state.

A chunk of the people of Esa Oke - the terrain of Bola Ige, the murdered attorney general Omisore was accused of having a thing or two to do with his death and strong point of ruling political party, All Progressives Congress - came out enmasse to sweep what was labeled 'the foot prints' of Omisore and his campaign train after they visited the area.

The move in local area translates extreme rejection of the swept away troop and what they represent.

Here are details of the happenstance.


'The people of Esa-Oke, the hometown of the late political icon, Chief Bola Ige SAN, trooped out in their thousands to declare their support for Ogbeni Rauf Aregbesola, while at the same time, they swept away the feet of Senator Iyiola Omisore, the PDP flag bearer in the forthcoming gubernatorial election and those of his supporters from the ancient town
.
The mammoth crowd, armed with brooms, began the sweeping from the palace, to the town hall and the various streets around the town
.
The number of the people kept increasing as several groups, market women, aged men and women among others joined the rally.

'Various anti-Omisore songs rented the air as the people rain curses on the killers of their son, Chief Bola Ige.

While addressing the mammoth crowd, the chairman of the All Progressives Congress (APC) Esa-Oke, Chief Ogungbe thanked the people of Esa-Oke for being peace loving people during the visit of those he described as unwanted visitors who invaded the town with armed policemen, armed thugs, hemp smokers and masked men. 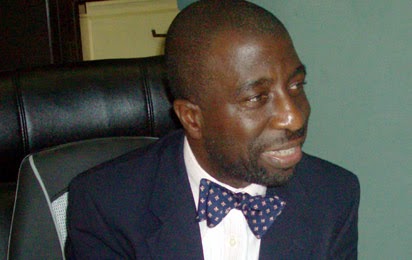 He noted that the youths had insisted that the unwanted visitors will not be allowed access into the town which they see as being insulting after the alleged involvement of Omisore and Adesiyan in the assassination of Ige and his uncomplimentary remarks about Ige and his kinsmen. However, the situation was prevented from assuming an uglier dimension for OMisore, after Governor Aregbesola pleaded with the people of Esa-Oke to allow peace to reign.


The late Ige’s son and state Commissioner for Lands, Physical Planning and Urban Development, Arc. Muyiwa Ige; who was nicknamed ‘Arole Ige’ by the people, thanked them for their support for the administration of Ogbeni Rauf Aregbesola and praised them for remaining steadfast in spite of lies, propaganda, insults and intimidation being peddled around by the opposition.


Ige, who led the party leaders and others in the house to house campaign, urged the people not to be attracted by their greek gift, empty promises, whims and caprices.

He debunked the lies that the Governor is planning to move the state College of Technology established by his late father outside the town.

“They don’t have anything to offer us, they don’t have manifestoes, they have nothing upstairs, all they know is ‘chop I chop’ like a greedy man eating two corns at the same time.

“They don’t know how Rauf run an UNSUAL Government turning every nooks and crannies to befitting places to behold
.
“What did they do in the eight years? Nothing, they did not employ a person either at the state level or even federal where they claimed to be rooted.

“Here in Esa-Oke, over 100 youths are O’YES cadets, more than 40 are in civil service, the good roads they drove their exotic cars they bought through your money was done by this administration, some of our children here were sent to Germany for O’REAL training while another six are currently in Gremany for the mechanic training,” Ige said.

He added further that “the administration has established a world class mechatronics institute within the premises of the Osun State College of Technology, Esa-Oke and that activities will commence as soon as the mechatronics trainees return this month”.

In his address, the Special Adviser to the Governor on Agriculture and Food Security, Festus Agunbiade, praised the people for coming out in large number as he urged them not to ever fall into the antics of the opposition party. 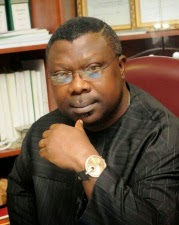 “This is purely demonstration of love and faith you have in us and our party. This is not a rented crowd; we did not import people from neighboring towns not to talk of inviting people from Ekiti, Oyo, Ogun and Lagos states. They will be dazed with the result on the election day. We shall not run away and we will protect our votes, no amount of intimidation can deter us’’, he stated
.
The rally and the house to house campaign lasted for several hour'
Posted by MAN ABOUT TOWN at 5:25 AM