The 'famous frugality' that those close to him constantly whispered about was recently displayed in the open and was caught on camera( pictures inside).

Otunba Subomi Balogun, the chairman of First City Group, along with his wife Oloori Adetutu Abimbola and 18 suitcases in their possession waited for hours to
secure VAT refund at an international airport.

The details and exclusive pictures provided by theelitesnigeria are reproduced.

'Otunba Michael Subomi Balogun, Chairman of the First City Group, is reputed with the establishment of the first indigenous stock broking firm, issuing house and investment bank in Nigeria.

After 18 years of unbroken success the bank has since changed its name to First City Monument Bank and is one of the leading post-consolidation banks in Nigeria today.

Last Sunday, 13 July 2014, We sighted Otunba Balogun, who is blessed with a striking presence, at the Terminal 5 of London Heathrow Airport, the United Kingdom. 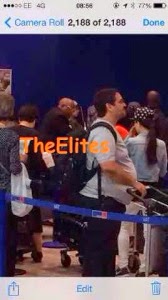 Further checks, revealed that the revered banking mogul, was on the queue for hours, to claim VAT Refunds.

Naturally, his wife, Oloori Abimbola Adetutu was in his company.  Also in his entourage were two aides, a domestic maid (a Philippine), and of course, eight suitcases. After waiting on the queue for several hours, Otunba Balogun eventually got his VAT refunds, which ran into several thousands of pound sterlings.
The pictures below showed Otunba Balogun, waiting on the long queue to claim his VAT refunds.'