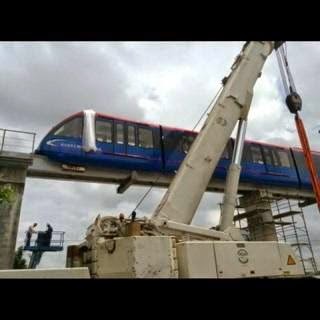 Rivers state governor Rotimi Amaechi is set to keep faith the promised delivery date of the first mono rail in the country.

'Indications have emerged that the ongoing monorail construction in Rivers State will be launched in October as proposed by the state government as the project appears to have entered its final stage of rail installment on the track.

The monorail project had become a subject of political controversy in the state as many of the opposition to Governor Rotimi Amaechi had dismissed it as a wasted effort and resources because it was not going to fly, especially given the slow pace of work on site.

But Amaechi had continued to dismiss any such misgiving, saying even if that was the last thing he would do before leaving office on May 29, next year, he would make sure it is realised.

'Reiterating this commitment recently, Amaechi told journalists in Port Hacourt, the state capital, that the “Monorail would be completed. The reason the monorail must be completed at all costs is political. I want to ride in the monorail and call the Amaechi haters to come and see that I am riding on the monorail.

“Even if it is May 29, 2015, people will ride on the monorail. We would hang the rail. What is delaying the monorail is just the terminal where they would maintain it. That is what they are fixing now, once they fix that, it will be ready,” he explained.

However, walking his talk, it was noticed at the weekend that the contractor had started to hang the rail on the tracks, a move that might have confirmed the fact that the first phase of the project would be completed before the Amaechi administration leaves office next year.

“I personally believe the governor means business as far as the project is concerned. And if you check, he has always said it; that he would not leave the project abandoned. That means it is a done deal. Now, we can confirm this because we can see the rail being put on track. That is commendable and we hope to ride on it soon,” said a resident of old GRA, Port Harcourt'
Posted by MAN ABOUT TOWN at 1:03 PM