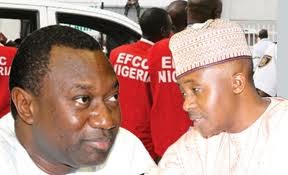 The unraveling fallout of the sting operation carried out by man of means, Femi Otedola that exposed corruption in the midst of supposed role model and leaders is
shifted.

Receiver of the $620,000 bait and powerful federal lawmaker, Farouk Lawan's ongoing trial is moved to October 2014.

Here are details of this development

'A high court at the Federal Capital Territory (FCT) on Monday fixed October 28, 2014 to hear progress report on an appeal filed by Honourable Farouk Lawan, former chairman of the federal house of representatives ad-hoc committee on fuel subsidy.

The Independent Corrupt Practices and other Related Offences Commission (ICPC) filed a seven-count criminal charge against Lawan and Boniface Emenalo — secretary of the committee — accusing them of obtaining $620,000 from Mr. Femi Otedola, an oil magnate and chief executive officer of Zenon Oil and Gas Limted in order to doctor the committee’s report in favour of the company.

'Lawan and Emenalo had earlier filed an appeal challenging the competence of the criminal charges against them.

At the resumed hearing of the case, counsel to the accused, Mr Akinyemi Aremu, filed a motion seeking stay of proceedings in the case, pending the determination of their appeal.

Aremu urged the court to grant the application to enable both parties report to the court on the progress of the appeal.

Counsel to ICPC, Chief Adegboyega Awomolo (SAN), did not oppose the application, but he expressed disappointment by the accused person’s application for stay of proceedings.

In her ruling, Justice Adebukola Banjoko adjourned the case to October 28 and 29 for report of appeal or definite hearing.'

..thecableng
Posted by MAN ABOUT TOWN at 2:53 AM