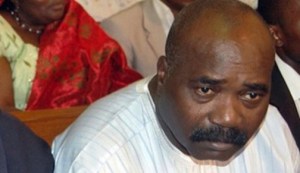 Respite appears to be far from the former governor of Edo State, Chief Lucky Igbinedion over alleged corruption charge
as the state governor, Adams Oshiomhole has ordered the probe of an alleged fraudulent removal of $31 million from the Government coffers during the administration of the former governor.

The decision to probe the former governor who had been prosecuted in the past for cases of fraud by the Economic and Financial Crimes Commission (EFCC) and who was convicted, was reached at the end of the State Executive Council meeting held in Benin on Wednesday.
Briefing newsmen at the end of the meeting, the State Commissioner for Information, Mr Louis Odion said: “there is the issue of a fraud that was discovered while turning our books. We found that the sum of $31 million was fraudulently taken from state coffers under the administration of Chief Lucky Ogbinedion. The Comrade Governor has directed the Attorney-General to commence legal action in that direction.
“So in the coming days, the state government will take legal action to ensure that what was stolen from Edo State Government is recovered. When you convert $31 million to naira, it fetches you a whooping N7 billion. You can imagine what N7 billion will do in improving the human condition in Edo State.”
The Commissioner who praised some landlords and companies in the state on the level of their compliance with the land use charge said Comrade Oshiomhole has asked me to convey his appreciation and gratitude to the good people of Edo State as well as members of the private sector for their voluntary compliance with the Land Use Charge.
“He has asked me to single out Coca-Cola Bottling Company for voluntary compliance. I think we need to put this in context. Our challenge as a government is mounting. Every day, our citizens want government to intervene, they want schools to be built, they want roads reconstructed but the truth is that our revenue is dwindling and without deepening the tax base, we won’t be able to deliver.
“So when we find corporate body and citizens who voluntarily comply by paying their taxes, we view them as partners in progress.
“We have also been directed to put on notice the CEOs of some companies, notably banks who have refused to remit what is due to the government. I am speaking specifically with regards to some banks that have failed to remit withholding tax to the state government.”
Throwing light on the $31m fraud, the State Commissioner for Commerce and Industry, Hon. Abdul Oroh said, “The $31 million which was stolen from the people of Edo State for the transaction which was designed clearly for criminal purposes. This project was called Avrant Cement Company situated at Ekpe, near Ikpeshi in Akoko Edo Local Government.
“The company was supposed to produce cement to take advantage of the large scale deposit of limestone in that part of the state. The company was registered as Abat Cement Company Ltd and this company had three shareholders. The Abat Cement Company had 75% shares, Edo State Government had 15% shares and 10% shares were reserved for ‘other Nigerians’.
“Although Edo State Government was given only 15 per cent share, 100 percent of the revenue invested in the company, $31 million was taken from the account of Edo State Government. This money was withdrawn from the account of Edo State Government under Afribank. As the money was withdrawn, construction of the company started and all the major structures were in place, 90% completed, machines were installed but there was no other contribution from any other source for the construction and procurement of these equipments. So everything invested in that company came from Edo State Government.
“It is on record according to the shareholders agreement, those who claim to be first share holders, Abat Holdings were given 75 million shares representing 75 percent, the second share holders were given 10 percent and the thirds share holder, the Edo State Government was given 15million shares representing 15 percent. The agreement was signed by the Fashunu and Governor Igbinedion who signed on behalf of the shareholders.
“The fruit juice processing company in Ehor was established in 2001 by the Lucky Igbinedion’s administration. The cost of establishing that company was N368,458,195 (Three hundred and Sixty Eight million, four hundred and fifty eight thousand, one hundred and Ninety Five naira) was invested in this company by the Edo State Government. The company was owned 100 percent by the Edo State Government. The materials for the company were imported from England from a company at a sum of £310,000.
“The company was now sold including the land and the three hectares pineapple farm which was also developed by the Ministry of Agriculture for N283.8 million. The company was completed and there was a test run. There was no reason to privatise it and it was sold out at a give-away price which only could have been influenced by criminal intentions.
“There is also the one at Ikpeshi, the Solid Mineral Processing Industry. This company which was also owned 100 per cent by Edo State Government was established in 2003 at the sum of N85 million but was eventually sold to a company for N56 million.
“There were other criminal transactions. If you look at the fertilizer company in Auchi, most of the equipment installed at the point of commissioning were all fraudulent because they were outdated and not useful and fertilizers were procured from somewhere and released as being products of the company.
“At Okpella Cement Company, they manipulated the transactions to the detriment of the people of Edo State and to the adversity of the state economy. When the Comrade Governor came in, in 2009, The Governor had to re negotiate the whole process of the Okpella Cement.
As we speak, the company that is running the Cement Company now has invested about $500 million and very soon, they will be producing cement in the new plant and in the old plant that has been re activated.
Posted by MAN ABOUT TOWN at 5:45 AM