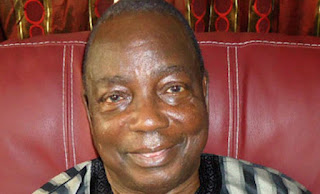 Governor Godwin Obaseki of Edo State has declared a seven-day period of mourning in honour of Dr Samuel Ogbemudia, a two time governor of the former Bendel State.
Obaseki, in a
statement issued by his Chief Press Secretary, Mr John Mayaki said the mourning period would begin from March 10.

The governor described the death of late Ogbemudia as saddening and prayed for his soul to rest in peace.
Obaseki described the deceased as  “a fine military officer who helped to liberate the Mid-West region during the civil war”.
He said under Ogbemudia’s   administration, Bendel became a leading state in education, sports and industry.
“As two time Governor of Bendel, which comprised present-day Edo and Delta states, Dr. Samuel Ogbemudia will be fondly remembered for the strong foundation that he laid to consolidate the infrastructural, social and economic development of both states.
“Amongst his several milestone achievements was the Mid-West Institute of Technology, which is now the University of Benin.
“As we mourn our great leader and father, we take solace in the legacies he bequeathed Edo State and indeed Nigeria.
(NAN)