Khaleed Umar Al-Makura, son of Nasarawa state governor, has been arrested in connection with the death of Ovye Amos, a JSS 2 student of Government Secondary School, Lafia. 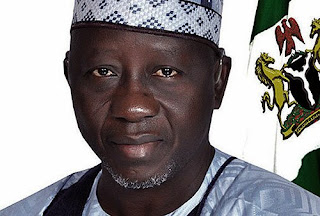 Amos died on Sunday night after being hit by a
car driven by the governor’s son.

Amos’ colleagues had trooped to the streets to protest his death. They carried placards with various inscriptions, demanding justice.
The police, officers of the Nigeria Security Civil Defence Corps, teachers and government officials intervened to calm the students.
Aliyu Tijjani, Nasarawa state commissioner for education, said the government had taken measures to ensure that the perpetrator is brought to book.
“He has already been arrested. I want to express my profound dismay and sadness over what happened here yesterday. It is unfortunate, very very unfortunate,” he had said.
Goodluck Agwu, school head boy, explained that Amos was hit by the car driven by Khaleed when he went out to buy batteries for his flashlight at 8:00pm.
The students, who were not satisfied with the explanation of the commissioner, continued their protest but police were deployed to calm them.
“It is a painful thing, we sympathise and empathise with you and we assure you that investigation is ongoing and that particular culprit as we are speaking now is under detention in our custody,” Maikudi Shehu, area commander of Lafia area office, had told the aggrieved students.
“We will keep you informed of developments as they unfold.”

thecable
Posted by MAN ABOUT TOWN at 6:49 AM