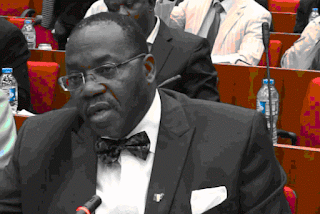 Godknows Igali, a former permanent secretary in the ministry of power, has reportedly forfeited 47 sport utility vehicles (SUVs) to the federal government.

According to The Nation, the information was contained in a report which the Economic and Financial Crimes Commission (EFCC) submitted to the senate committee on financial crimes and anti-corruption.

The commission was quoted to have said the cars
were recovered in the Abuja residence of Igali.

Igali is currently undergoing investigation for alleged corruption.
Former President Goodluck Jonathan appointed him as his chief of staff in 2011.
Igali was Nigeria’s ambassador to Sweden and former permanent secretary, water resources ministry, and secretary to the Bayelsa state government.
A graduate of Foreign Academy, Lagos and Diplomatic Academy, Islamabad, Pakistan, he was secretary of the Nigeria trade and economic mission to Ghana, Liberia, Jamaica, Ethiopia, Namibia, and the USA, from 1989 to 1991.
He was secretary, Nigerian delegation to Non-Aligned summit , Cartagena, Colombia, and secretary, Nigeria delegation, first north-south summit on energy , Pueto-La Venezuela in 1996 and 1997 respectively.
Igali was also a member of the Nigeria delegation to Nigeria-Cameroon mixed commission from 2002 to 2005 , and member, African Leadership Advisory Board.

thecable
Posted by MAN ABOUT TOWN at 11:00 PM