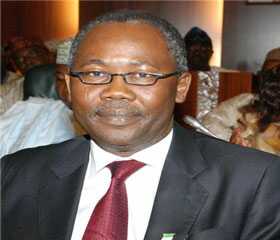 Mohammed Adoke, former attorney-general of the federation (AGF), has written a letter to Abubakar Malami, minister of justice, maintaining his innocence in the controversial Malabu oil deal.

The Economic and Financial Crimes Commission (EFCC) has alleged that Adoke exchanged more than $2.2 million in a bureau de change in Abuja as part of his own share, an allegation he denied.
Adoke wondered why the anti-graft agency singled him out for prosecution when he did
not commit any illegality.

He said at least three presidents were involved in the deal, and that apart from Umaru Musa Yar’Adua, former Presidents Olusegun Obasanjo and Goodluck Jonathan have not denied scrutinising the terms of settlement in the deal.
Adoke said he was being vilified for choosing to serve his fatherland.
“I anxiously want to know where I went wrong that I have been singled out by the EFCC for prosecution,” he wrote.
“I also want to know the effect of section 5 of the constitution of the Federal Republic of Nigeria, 1999 as amended with respect to the vesting of all the executive powers of the federation in the president to exercise by himself and or through his ministers and appointees.
“What is the effect of section 5 of the constitution on persons who act pursuant to lawful Presidential approvals? This is more so as two out of the three presidents that had the opportunity to scrutinise this settlement (Presidents Obasanjo and Jonathan) are alive. Have they disowned the settlement? Has our predecessor in office, Chief Bayo Ojo, SAN distanced himself from the settlement he brokered?
“Have the honourable ministers of petroleum resources and finance at the time of implementation of the settlement (Mrs Diezani Allison-Madueke, CON and Dr. Olusegun Aganga, respectively) disowned the settlement or their signatures? It is my respectful view that Nigerians deserve answers to these questions as it will help them and my humble self to understand the actions and the machinations of the EFCC masquerading to be acting in the national interest while surreptitiously deploying state resources and machinery to promote the personal agenda of their cohorts.”
Adoke appealed to Malami to ensure that state institutions are not hijacked and used as a tool for vendetta.
He also said he was ready to face justice if anything incriminating is found on him.
“I wish to use this medium to appeal to the honourable attorney-general of the federation to be mindful of his overarching powers over public prosecution and the need to ensure that state institutions do not become persecutors or instruments in the hands of those pursing personal vendetta,” he said.
“The constitution and the traditions of our noble profession demand your oversight over public prosecution.
“Consequently, if you find that I had breached my oath of office or abused my office, please do not hesitate to bring me to justice.
“However, if it is the contrary, as I strongly believe, that certain individuals who had vowed to even scores with me are now being aided by state institutions such as the EFCC; I deserve protection from these unwarranted attacks and dehumanising treatment that I am being subjected to merely because I chose to serve my fatherland.”

thecable
Posted by MAN ABOUT TOWN at 12:02 AM