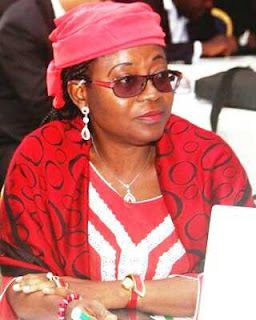 Omatek specialises in the manufacturing of computers and other Information and Communications Technology devices.

The news of her death was
announced on Sunday evening by Adebiyi Fashoyin, a close confidant of the deceased and former Head of Corporate Communications of Omatek Computers.

In a telephone conversation with our correspondent, Fashoyin said she died on Sunday morning of complications from cancer of the pancreas.

“The cancer of the pancreas was noticed not too long ago. Before we knew it, it became severe and that was it. My pain is that she died too young as she was just 54 years’ old, having been born in 1963,” he said.

In a tribute on his Facebook page, Fashoyin said, “Good night, Amazon! The heavens are blazing forth, the death of the Princess! You were ahead of your time in spite of your humility and simplicity. Nigeria, nay, Africa lost an enigma, who gave me my first chance in management.

“I am consoled that you named one of my children after yourself; Omatule. Death, where is your sting? I weep! I also smile at your timeless legacies. You were my friend, my boss and confidant.

Your short but well accomplished life, is better than a century without a name. RIP, Mrs. Florence Seriki, OFR.”

Until her death, Seriki served as Chief Executive Officer and Group Managing Director of Omatek Ventures.