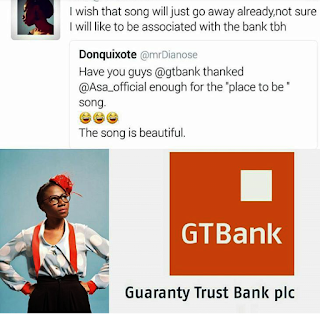 Singer Asa doesn’t want anything to do with Guaranty Trust Bank (GTbank), the financial institution she composed famous theme song, ''the place to be'' for - again..

And she has proclaimed this publicly.

She made her position known in a
recent reaction to a tweet from a fan.

Asa wrote ‘’ I Wish that song will just go away already, not sure i will want to be associated with the bank tbh (to be honest).

Her response is in reaction to a question to GTbank by Donquixote asking ‘’have you guys @gtbank thanked @Asa_official enough for ‘’the place to be’’ song.

The internationally recognised singer is however silent on reasons for her public posture with the bank she was once ''promoted''.
Posted by MAN ABOUT TOWN at 10:04 AM