Transcorp Hotels Plc Comes To Town With N4.5bn Profits, Announces Dividend Of 40k Per Share For Full Of Praises Shareholders 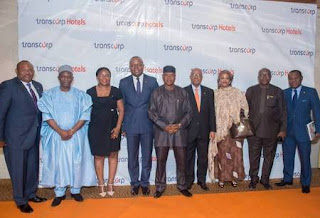 Transcorp Hotels Plc has announced a profit after tax of N4b at its 3rd Annual General Meeting which took place at Transcorp Hilton Abuja. At the meeting, the Shareholders of Transcorp Hotels Plc   commended the management and staff of the Company for recording a strong financial and operational performance in the financial year ended 31st December 2016, with improvements across all
indices despite the economic recession which took a hefty toll on hospitality businesses generally.

The Shareholders gave the commendation at the 3rd Annual General Meeting of the Company held at Transcorp Hilton Abuja on Wednesday March 15, 2017, attributing the feat to the quality of Transcorp Hilton Hotel as the leading hospitality destination in Nigeria. They also described the management of the Company as visionary and dedicated, as demonstrated by the Hotel’s constantly improving quality of service.

The Shareholders unanimously approved the Board’s recommendation of a final dividend of 40 kobo per share, stating that they are confident that as the Company continues to make progress, it will not relent in meeting their expectations.

Speaking on behalf of shareholders, Mr. Boniface Okezie, Chairman, Progressive Shareholders Association of Nigeria (PSAN), expressed appreciation to the Company’s Board and Management for paying dividend at a period when the country’s economy is in dire straits, leading to significant drop in hotel occupancy. He said, “At a time when a lot of companies prefer to cut dividend with a ready excuse in the current state of the economy, we are delighted that our Company has paid dividend which will go a long way in meeting our financial needs".

Also speaking, AlhajiMuktarMuktar, President, Trusted Shareholders Association, commended Transcorp Hotels for what he termed "a stellar financial performance" amid a challenging period and the dividend payout which he said was equally laudable. According to Muktar, Transcorp Hotels has not relented on its oars and has continued to shine brightly delivering world class service to an ever growing clientele of top notch guests across the world. Little wonder it has consistently won numerous awards and most recently bagged a long list of honours in 2016 that will make even its competitors go green with envy. “We are proud of this achievement and encourage the MD and the Board to continue in this direction”. At this point, the shareholders gave a standing ovation to the MD/ CEO  for not just winning the Seven Stars 2016 CEO of the Year at a global event, but for also leading Transcorp Hilton to win the Seven Stars Seal of Excellence Award for the first time.

Earlier, Chairman of the Company, Olorogun O’tega Emerhor explained to shareholders that the strong performance recorded by the Company is because the Company continued to re-invent its offerings, in keeping with service excellence. He noted that the Company was relentless in maintaining market leadership in its flagship property, closing the year with an occupancy of 60%, well ahead of competition. This according to him ensured Transcorp Hotels delivered a resilient performance even in the face of the impact of economic recession on the hospitality industry which has seen occupancy for large hotels dropping below 35%.

“2016 was a year of notable achievements for Transcorp Hotels Plc, despite the strong economic headwinds. The upgrade of Transcorp Hilton Abuja is underway in line with our commitment to stakeholders to build Africa’s choice hospitality assets”, Emerhor said.

He noted that, in validation of Transcorp Hilton Abuja as the prime hotel property in Abuja, the Hotel won numerous awards in 2016 and for the fourth year in a row emerged the proud recipient of five prestigious awards at the 23rd World Travel Awards; the laurels include Africa’s Leading Business Hotel; Nigeria’s Leading Business Hotel, Nigeria’s Leading Hotel and Nigeria’s Leading Hotel Suite (the Presidential Suite). The World Travel Award is recognized globally as the hallmark of quality, with winners setting the benchmark to which others aspire. The Hotel also went on to clinch the 2016 TripAdvisor Travellers’Choice Awards and the 2016 Seven Stars Luxury Hospitality and Lifestyle awards, Emerhor said.
In his review of the 2016 results, the Managing Director/Chief Executive Officer of Transcorp Hotels Plc, Mr. Valentine Ozigbo said that the Company recorded a 10 percent growth in gross revenue at N15.31bn as against N13.98bn in 2015.  This according to him was largely driven by key events including visits by very high profile guests, many foreign heads of government and representatives of consulates. All this he said was due to aggressive business development.

He said the Company recorded a Profit Before Tax of N5.24bn in 2016, maintaining 2015 performance of N5.38bn while the Profit After Tax for the year surpassed 2015 performance of N3.5bn by 17 percent to N4.10bn in 2016. "Our major priority now is creating value for our stakeholders, improving customer service for our guests and maximizing shareholder value, and we believe very strongly that the foundation that we are laying, with the current upgrade and refurbishment of the Transcorp Hilton Abuja and repositioning of Transcorp Hotels Calabar, is certain to yield very positive results.” He said.
“On this premise, I am happy to add that our turnaround initiatives for Transcorp Hotels Calabar are equally paying off as the Hotel recorded laudable profit for the first time since 2012”. This development, he explained, was predicated on strategy of increasing occupancy and proactive cost management" Ozigbo stated.

Speaking on 2017 prospects, Mr. Ozigbo maintained that the Company will keep up with the tempo to sustain the financial performance in 2017, despite the impacts of the temporary airport closure. He also confirmed that the Company is on track to deliver on the ongoing upgrade of Transcorp Hilton Abuja as preparations get on for the 30th anniversary of the Hotel in the 2nd quarter of this year.
Posted by MAN ABOUT TOWN at 6:27 PM