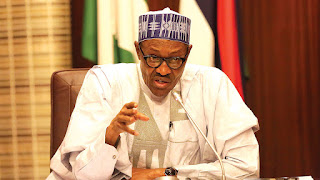 President Muhammadu Buhari on Wednesday changed a plan by which he was due to return to London this weekend for another round of medical treatment, barely two weeks after his return from a hospital there.
Instead, his doctors will be arriving on
Friday to carry out further medical examination on him.

Sources at the Presidency informed SaharaReporters that the president’s advance party had already left Abuja earlier in the day by Ethiopian Airlines before they were recalled to Abuja.
Our sources say the hawks within the presidency advised against taking the president abroad so soon after his seven weeks away, as that would begin to feed the rumor mill all over again about his ailment.
In a short televised address upon his return, Buhari had hinted about returning to the hospital shortly, saying there might be a need “for further follow-up within weeks.”  Given the topsy-turvy political climate in the country, however, his advisers felt it was unwise to allow him to stay away for too long.
The president has traveled to London several times since coming to power for a medical reason before traveling earlier this year for a prolonged medical treatment.  He had also traveled there in June 2016, reportedly consulting with an ear, nose and throat specialist after he contracted an ear infection.
The latest developments come as pressure is mounting on the presidency to disclose how much was spent on his 49-day “medical vacation” in the United Kingdom, with Nigerians saying they have a right to know.
Activists, including well-known lawyer Femi Falana, and civil society groups such as the Socio-Economic Rights and Accountability Project, the Centre for Anti-Corruption and Open Leadership, and the Campaign for Democracy, among others, argue that the medical bill is of public interest because Buhari touted transparency and change in public affairs when he ran for the presidency.


saharareporters
Posted by MAN ABOUT TOWN at 1:54 AM